Victory over MNLF in Zambo too costly, says peace advocate 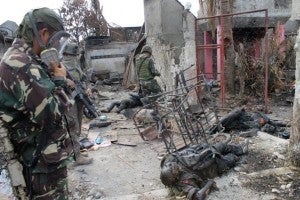 Philippine soldiers, wearing gas masks, look at bodies believed to be Muslim rebels next to destroyed houses,at the site of heavy fighting during the stand-off between government forces and Moro National Liberation Front (MNLF) rebels in Santa Catalina area of Zamboanga City, on southern island of Mindanao on September 26, 2013. AFP FILE PHOTO

MANILA, Philippines —A “Pyrrhic victory” is what awaits the government in its almost three-week-old confrontation with disgruntled guerrillas of the Moro National Liberation Front in Zamboanga City, according to Mindanao peace advocate Dr. Grace Rebollos, who described the MNLF rebels as “our own.”

“What does victory here mean? Whoever is victorious here, even if the military claims that they’ve eradicated the MNLF forces, and when there are no more bombings, and they have all died or surrendered, where do we say we’re victorious?” she told a forum at the University of the Philippines Asian Center on Friday.

“This Pyrrhic victory may be a victory, but at what cost? If you look at the lives that have been lost, the wedges that have been driven, the psychosocial trauma of all, Zamboanga City held hostage…” she said.

On Sept. 9, MNLF guerrillas loyal to Nur Misuari, MNLF founder and former governor of the Autonomous Region in Muslim Mindanao, occupied a coastal section of Zambonga supposedly on their way to hold a peace rally and hoist their “Bangsamoro Republik” flag at City Hall, setting off a series of battles that burned down a section of the city, killed scores of people and forced more than 100,000 people out of their homes.

Rebellion charges are being prepared against several MNLF personalities, among them Misuari and his top lieutenant, Habier Malik, who allegedly led the occupation of the city.

Rebollos, who represents Peace Advocates Zamboanga  and Mindanao PeaceWeavers, described the conflict in Zamboanga City as “a loss of the entire Philippine nation.”

She said the conflict has driven a wedge deeply between Christians and Muslims living in Zamboanga City.

“We desperately need a healing process, not only in terms of infrastructure, but also psychosocial healing… because even children are sending hate text messages to each other,” she said.