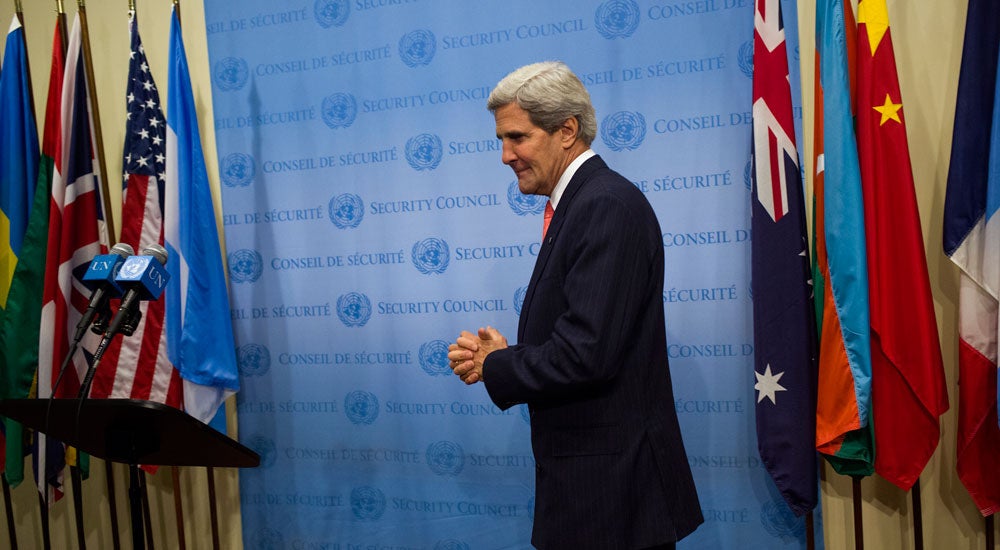 US Secretary of State John Kerry walks towards a dais to speak with media members after a meeting of the five permanent members of the Security Council plus Germany during the 68th session of the United Nations General Assembly at U.N. headquarters, Thursday, Sept. 26, 2013. AP Photo/Craig Ruttle

UNITED NATIONS – The UN Security Council passed its first resolution Thursday on restricting the trade in illicit small arms, but Russia refused to back the measure.

Russia was the only member of the 15-nation body not to support the resolution drawn up by Australia, the council’s current president.

The measure calls on nations to consider signing a new treaty in conventional arms, as well as for strengthening the implementation of Security Council weapons embargoes and securing arms stockpiles.

Russia, which abstained from the vote, said the resolution should have contained provisions against illegal supplies of arms to non-state groups.

Alexander Pankin, Russia’s deputy UN ambassador, told the council the resolution “lacks an important and urgent provision” that his delegation had proposed.

Russia, one of the world’s key arms producers and exporters, has shunned the arms treaty. It also often raises the case of “non-state” groups to attack Syrian opposition rebels.

UN leader Ban Ki-moon used the meeting to urge more countries to sign the treaty, which the United States joined on Tuesday.

Australia’s Foreign Minister Julie Bishop said “the council has taken too long to adopt its first resolution on small arms.”

She highlighted how illicit arms and weapons fuel conflict around the world.

“These arms and weapons are linked to terrorism, piracy and transnational organized crime. They are an impediment to peace building efforts everywhere, and pose threats to civilians, peacekeepers, aid workers and civil society organizations.”

“The council should consider these issues more systematically, return to this subject with greater frequency and ensure that our commitments today are not forgotten tomorrow,” Bishop said.