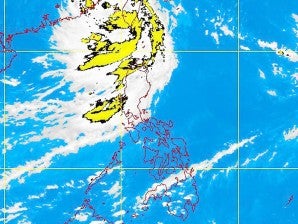 MANILA, Philippines — The death toll from Tropical Storm “Mina” (International codename: Nanmadol) has risen to 13 as it moved away from the country, the latest report from National Disaster Risk Reduction Management Council said.

Earlier on Monday, the NDRRMC reported that Geofonie Cael, 18 and Rodolfo Gagucas, 17 from Benguet died from a landslide.

Six others were reported from the Cordillera Administrative Region, three from Region 1 (Ilocos), and one each from the National Capital Region and Regions 3(Central Luzon) and 5(Bicol), the NDRRMC said.

Nine are still missing and 21 injured, the NDRRMC said.

Mina maintained its strength as it moved away from the country, the latest Philippine Atmospheric Geophysical and Astronomical Services Administration said.

In its 11 a.m. bulletin, Mina has maximum sustained winds of 110 kilometers per hour near the center with gustiness of up to 140kph. It was last seen 190 kilometers north-northwest of Basco, Batanes and was moving northwest towards the vicinity of Southern China by Wednesday morning.

Signal no. 1 remains in the Batanes Group of Islands, Pagasa said.

The rest of Luzon will have monsoon rains while Mindanao will have mostly cloudy skies with scattered rainshowers and thunderstorms, Pagasa said.