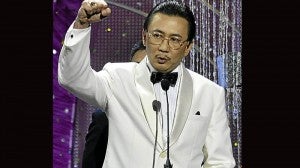 MANILA, Philippines—Laguna Gov. Emilio Ramon “ER” Ejercito, nephew of former President and now Manila Mayor Joseph “Erap” Estrada and cousin of Sen. Jinggoy Estrada, may yet become the poster boy of the Commission on Elections’ (Comelec) campaign to penalize politicians who violated election rules after a Comelec division ruled to unseat the governor for excessive spending to win reelection.

As if to emphasize how determined the election body was in its campaign to enforce election laws, Comelec Chairman Sixto Brillantes Jr. himself announced the decision of the first division on the case against Ejercito.

Brillantes said Ejercito spent more than P20 million in political ads in the TV network ABS-CBN in violation of the campaign finance law that set a P4.5-million ceiling on his campaign expenses.

Aside from the prospect of losing his seat as Laguna governor, Ejercito also faces criminal charges for underreporting his campaign expenses, according to Brillantes.

“[Ejercito] is now ordered to be disqualified … and he will be succeeded under the succession law … and the order of the division is for the vice governor to assume office,” Brillantes said in an interview.

The vice governor is Ramil Laurel Hernandez, a political ally of Ejercito.

More will be removed

“We just want to make an impression that we are not joking. There will be officials who will be removed from office. More will follow [Ejercito]. We are doing this no matter who is affected,” Brillantes said.

In a text message, Ejercito said he had no intention of stepping down and would remain governor of Laguna province since the Comelec’s decision was not final and executory.

“I am entitled to file a motion for reconsideration,” said Ejercito. “I just hope and pray that evil politics is not behind this.”

He said he had full trust in the integrity of the Comelec and would leave the discussion on the merits of his case to his lawyers.

“Based on my own reading, this decision of the first division is well documented because this involves contracts. This is the first time that we are hitting a governor of a large province,” the Comelec chief said.

Brillantes, however, said Ejercito might be removed from office only after the Comelec ruling became final and executory.

That would happen if Ejercito fails to file a motion for reconsideration in the Comelec en banc within five days after he receives a copy of the first division ruling, which is expected to be served either late Thursday or Friday.

“His disqualification will be implemented immediately once the decision becomes final. That’s the time he will be removed,” Brillantes said.

Brillantes said Ejercito’s case was not unique, noting that the

“He suspended a mayor during the prohibition period. That is an election offense but our [en banc ruling] is still under appeal,” he said.

The complaint over expenses against Ejercito, who played the role of a criminal in a remake of a movie about crime leader Asiong Salonga, was filed by defeated Liberal Party candidate for governor Edgar San Luis, who also provided documentary evidence against Ejercito.

Brillantes said Ejercito, under the campaign finance law, was allowed to spend only P3 for each of the 1,525,522 registered voters in Laguna province, or a “maximum limit of P4.5 million.”

But documents submitted by San Luis from ABS-CBN showed that Ejercito spent at least P6 million on TV ads.

“We also have additional documents showing that there was not just one receipt for P6 million. There were also other contracts [between Ejercito and] ABS-CBN,” Brillantes said.

“The total, as far as the records would show, reached over P20 million. Therefore, there’s a violation under the campaign finance law and the Omnibus Election Code,” he added.

San Luis lost in the elections to Ejercito despite an endorsement by President Aquino.—With a report from Maricar Cinco, Inquirer Southern Luzon