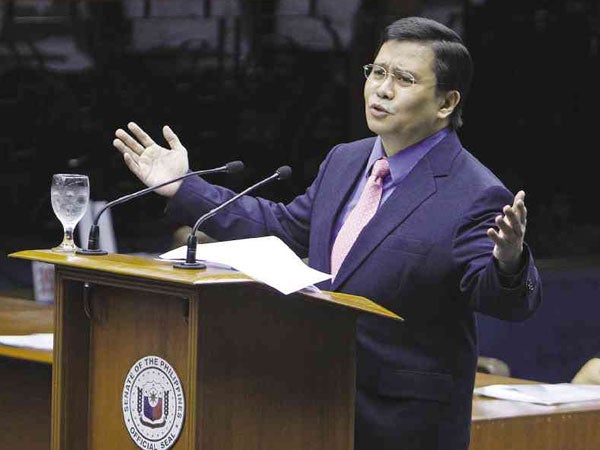 LATEST WHISTLE-BLOWER? Sen. Jinggoy Estrada says each senator who voted in May 2012 for the conviction of then Chief Justice Renato Corona at his impeachment trial got a P50-million allocation. RAFFY LERMA

The much-awaited privilege speech of Sen. Jinggoy Estrada predictably took to task his other colleagues in the Senate and some members of the House of Representatives for the alleged abuse of the Priority Development Assistance Fund (PDAF).

“Selective justice is injustice,” Estrada said, pointing out that out of the 371 lawmakers with “irregularities” in the PDAF noted in the Commission on Audit (COA) special report, the government seemed to focus only on himself and Senators Juan Ponce Enrile and Ramon Revilla Jr.   The three are already charged before the Ombudsman.

“We have been singled out,” Estrada lamented in his 17-page speech that curiously did not contain a single line in his defense.

Entitled “The Untold PDAF Story that the People Should Know,” the speech told a not so pretty story of how senators and congressmen are readily “rewarded, bribed,” and given “additionals” by the executive branch to get its way.

The speech was considered in the Senate as an attempt by Estrada to balance the adverse public opinion against the opposition lawmakers who have been implicated in the P10-billion pork barrel scam masterminded allegedly by Janet Lim-Napoles.

Pilloried in the media and charged in the Ombudsman for allegedly making millions of pesos in kickbacks from the PDAF, Estrada said the Aquino administration also used the pork barrel system to get its way in Congress, such as the conviction of Chief Justice Renato Corona in his impeachment trial.

“After the conviction of the former Chief Justice, those who voted to convict were allotted an additional P50 million as provided in a private and confidential letter memorandum of the then chair of the Senate committee on finance [now Senate President Franklin Drilon],” Estrada said in his speech.

Incentive after the fact

“Where did the money come from? I am sure [Budget] Secretary [Florencio] Abad knows the answer to this. And I am sure that this was not a unilateral decision of Senate President Drilon to hand out P50 million to each senator,” Estrada said in English and Filipino.

Estrada said he voted for the removal of Corona but did so only because he believed it was the right thing to do.

“I stand by my decision in my vote to convict the former Chief Justice and assure our people that I was never influenced by this incentive, which came after the fact,” Estrada said.

Estrada also hinted at the lack of transparency on how many millions of pesos in pork barrel funds the executive branch actually released to its allies during the previous administration.

“The unclear system in the apparent secret arrangements and how much each lawmaker received could be the reason why the DBM refuses to render a complete account of releases to all lawmakers as requested by the COA,” Estrada said.

“The Department of Budget and Management (DBM) website only provides information on PDAF releases from 2009 onwards. Why was there no information on releases in  2008? 2007? 2006? And other years? If you open the 2009 pages, the PDAF releases for then Senators (Rodolfo) Biazon, (Mar) Roxas, (Aquilino) Pimentel and Senators (Francis) Escudero, (Antonio) Trillanes and Manny Villar are among those conspicuously not posted,” Estrada added.

These current and former senators are known allies of President Aquino.

Estrada said Drilon and former Senate Presidents Juan Ponce Enrile, Manny Villar and Edgardo Angara “all know that the budget negotiations they conduct with the House and the DBM include negotiations not only for PDAF and the infrastructure projects of legislators but also for so-called congressional initiatives or budget insertions.”

“At one point, when Sen. Edgardo Angara was chair of the finance committee, I remember he even advised the senators in a caucus that there was a so-called economic stimulus fund where legislators from both Houses were allowed to avail of allocations for projects over and above the regular pork barrels. Thereafter, we were all asked to submit our listings to the committee,” Estrada said.

Estrada challenged Abad to release to the COA the complete documents so that the agency could complete the audit of P115 billion worth of pork barrel funds released from 2007 to 2009. The COA special audit managed to audit just P41 billion of the pork released during the period.

“It is puzzling that the DBM has kept silent in the midst of the discussions about the nation’s treasury,” he said.

Estrada lashed out at his colleagues, Senators Teofisto Guingona III and Alan Peter Cayetano in particular, for focusing the blue ribbon inquiry on him, Enrile and Sen. Ramon Revilla Jr.

“Why were they not mentioned? Was it because they are your allies? I am not saying that they have sinned. This is based on the COA report that there were irregularities in their allotments,” Estrada said.

“Were their PDAF properly used? It doesn’t appear so because according to the COA special audit report, 28 suppliers of Mandaluyong City denied having undertaken 167 transactions amounting to P28.744 million,” Estrada said.

“It means there were 28 suppliers of Mandaluyong who said they had no transactions worth P28.7 million in the city of Mandaluyong so it could be said that they were also ghost projects,” Estrada added.

During interpellation, Drilon asked Estrada if the P50 million given after the Corona impeachment trial was “a bribe.”

“It was not a bribe. It was never a bribe,” Estrada said.

On interpellation by Enrile, the Senate President and presiding officer during the Corona impeachment trial, Estrada said “somebody” approached him as regards the needed conviction “but did not promise any reward.”

Enrile pressed Estrada to identify the person but Estrada said, “I would rather keep it to myself since I was never swayed by the influence of this person.”

“I just want to preserve the integrity of the impeachment,” Enrile said.

Just as he inhibited from the blue ribbon proceedings, Estrada didn’t offer any explanation of his involvement in the Napoles PDAF scam.

He instead scored Guingona for repeatedly asking resource persons to name him, Enrile and Revilla as those that endorsed Napoles’ fake NGOs as recipients of their PDAF.

“I am not stopping nor do I plan to stop resource persons from naming names if this is part of their narrative,” Estrada said, lamenting that the names of the three senators were being mentioned “like a broken record.”

Estrada also called out Cayetano, who during the course of principal whistle-blower Benhur Luy’s testimony, asked if one of those involved had the slogan “Gusto ko happy ka” in apparent reference to Enrile.

“I know these people know they are the ones I’m referring to. My only message to them is, ‘For every finger you point to accuse and taunt, four fingers are pointed right back at you,’” Estrada said.

“And since he is fond of quoting from the Bible, perhaps he can reflect on this.  Let the one without sin cast the first stone.  Don’t be too self-righteous.  And most of all, don’t be too hypocritical,” Estrada added.

Estrada lashed out at the COA for its “selective and blatantly incomplete” report on the use of lawmakers’ PDAF.

“In contrast, the PDAF of Enrile, Estrada and Revilla are closely examined and entirely audited. What makes us so special, COA Chair Pulido-Tan?” Estrada added.

“P70 billion are unaccounted for. Shouldn’t the public know who the legislators are behind these? Can’t they be identified or does Chair Pulido-Tan just refuse to do so?” Estrada said.

Estrada also trained his guns on the report presented by Tan before the Senate inquiry.

Estrada said that when Sen. Nancy Binay asked that she name the other legislators in the COA report, Tan excused herself.

“We therefore ask why Mr. President. Why the propensity for selective reporting?  Why are certain pieces of information readily released?” Estrada said.

He also scored Tan for releasing the audit report to the media and then offering her often quoted “kahindik-hindik [appalling]” commentary.

He also criticized Tan for traveling abroad too many times a year. Estrada said that Tan traveled five times in 2010, nine times in 2011 and 10 times in 2012.

“And one more thing about the COA, Mr. President. Since when did COA ever start to have its findings validated by a broadsheet?” Estrada said.

“Chair Tan’s statement in a newspaper was quite appalling. ‘The Inquirer validates our findings. It’s providential.’ Is this the kind of Commission on Audit we have now?” Estrada added.

“We all here are victims of a flawed system which is so ingrained that it has been institutionalized,” he said.