2 popes reach out to atheists in apparent campaign | Inquirer News

2 popes reach out to atheists in apparent campaign 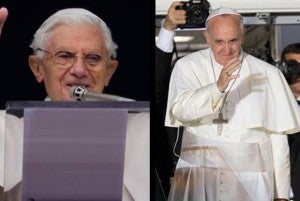 VATICAN CITY — Emeritus Pope Benedict XVI has emerged from his self-imposed silence inside the Vatican walls to publish a lengthy letter to one of Italy’s most well-known atheists. In it, he defends his record on handling sexually abusive priests and discusses everything from evolution to theology to the figure of Jesus Christ.

Excerpts of the letter were published Tuesday by La Repubblica, the same newspaper which just two weeks ago published a similar letter from Pope Francis to its own atheist publisher.

The letters indicate that the two men in white — who live across the Vatican gardens from one another — are pursuing an active campaign to engage non-believers. It’s a melding of papacies past and present that has no precedent and signals that the popes — while very different in style, personality and priorities — are of the same mind on certain issues and might even be collaborating on them.

Benedict became the first pope in 600 years to resign when he retired February 28, setting the stage for the election of Francis two weeks later. Benedict said at the time that he would spend his final years “hidden from the world,” living in a converted monastery tucked behind St. Peter’s Basilica, reading and praying.

Benedict’s decision to cloister himself was in part due to his own shy, bookish nature, but also to make clear that he was no longer pope and that his successor was in charge.

The resignation immediately raised the not-insignificant question of how the Catholic Church would deal with the novel situation of having one reigning and one retired pope living side-by-side, each of them called “pope,” each of them wearing papal white and even sharing the same aide in Monsignor Georg Gaenswein. Fear of schism in the church had prevented popes for centuries from stepping down.

Benedict has been seen only a handful of times since his retirement, and only once with Francis at an official Vatican ceremony in July. A prolific writer, he has published nothing since retiring — except for the encyclical “The Light of Faith” which was signed by Francis but was written almost entirely by Benedict before he resigned.

All of which made Repubblica’s publication of his letter to atheist mathematician Piergiorgio Odifreddi all the more remarkable, since it came out of the blue and just two weeks after a letter on almost the exact same subject was penned by Francis on the same pages.

The Vatican spokesman, the Rev. Federico Lombardi, said it was pure coincidence that the two men had written two well-known Italian atheists on the same subject. Francis’ letter uses a language that is much closer to Benedict’s style — but Lombardi denied the two had collaborated on it.

In Benedict’s letter, he responded to Odifreddi’s 2011 book “Dear Pope, I’m Writing You,” which in turn was the Italian’s response to Benedict’s classic “Introduction to Christianity,” perhaps his best-known work.

Odifreddi posed a series of polemical arguments about the Catholic faith, including the church’s sex abuse scandal. The former Cardinal Joseph Ratzinger headed the Vatican office responsible for abuse cases, and was pope when scandal erupted in 2010, with thousands of people coming forward in Europe, Latin America and beyond saying they had been molested by priests while the Vatican turned a blind eye.

In his letter, Benedict rejects personal involvement, saying: “I never tried to cover these things up.”

“That the power of evil penetrated so far into the interior world of the faith is a suffering that we must bear, but at the same time must do everything to prevent it from repeating,” he wrote, according to Repubblica.