Mark Joseph Solis receives the award and prizes, including flight tickets and accommodation to Brazil and Chile, for bagging the grand prize in the ‘Smiles for the World’ photo contest organized by the Chile Embassy in Manila on September 18 at the Cultural Center of the Philippines. He later admitted that he simply lifted from someone else’s Flickr account the winning photograph. Video courtesy of Raymond C. Ordoñez

A fact-finding committee from the University of the Philippines (UP) will investigate one of its students, Mark Joseph Solis, who has admitted that the winning photograph that he earlier entered into a contest was lifted from someone else’s Flickr account.

Ma. Fe Mendoza, UP National College of Public Administration and Governance (NCPAG) dean, told the Inquirer Monday that the committee’s first task would be to gather all the available information on the controversy.

“The body will determine the facts first, the chronology of events and recommend what the college can do to prevent this kind of unfortunate incident. It will also recommend what course of action to take regarding Solis’ case,” she said.

The controversy involving the 22-year-old student—who is taking up his master’s degree in public administration (MPA) at NCPAG—was a hot topic in social media web sites on Sunday night after it was revealed that his photo, which won the Smiles for the World contest sponsored by Chilean Ambassador Roberto Mayorga, was not his.

His entry showed a smiling boy supposedly from Zamboanga City who was helping his father farm seaweed. The UP student received a cash prize of $1,000 in addition to plane tickets for a trip to Chile and Brazil during the awarding ceremony held on Sept. 18.

But over the weekend, Gregory John Smith of the Children at Risk Foundation came forward and said that he took the photo of the boy who was not from Zamboanga, but from Brazil.

Smith took to Facebook and other social networks to air his gripes, saying “an impostor has abused my copyrighted image.”

Solis later apologized to Smith in a letter he posted on Scribd in which he admitted to passing off the latter’s photograph as his own.

He said he was driven by his “youth, lack of experience and the inability to see the repercussions of my actions.”

Following his admission, the Chilean Embassy has announced that it was taking back the prizes it had awarded to him. It also said it was considering taking legal action against him.

On the Facebook group Narinig ko sa UP (Overheard at UP), netizens claimed that Solis had done the same thing at least five times since 2011, posting several links to his photographs, followed by the original sources of the pictures.

Plagiarism is a grave offense at the state university and is punishable by expulsion and the stripping of one’s degree.

However, Mendoza admitted that Solis’ case was a “grey area” since it was not committed within the confines of the university. 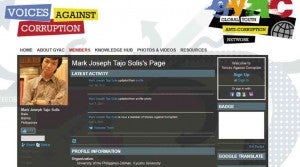 Screen grab of Mark Joseph Solis’ page on the Global Youth Anti-Corruption Network of which he is a member. According to its web site, GYAC is “a global network of young leaders, journalists, artists and ICT experts from civil society who work to improve transparency and social accountability for better governance.”

“There is a provision in the Code of Conduct which says all students of UP should observe the laws of the land. It will be up to the committee if its appreciation of the facts deems that the offense is covered by the Code of Conduct,” she said.

The three-man fact-finding committee—to be composed of a senior faculty, junior faculty and a student representative—is expected to submit its findings to Mendoza by Oct. 4.

Their recommendations will be the basis of further actions to be taken in Solis’ case: If it will be elevated to a higher body and if he will be charged or reprimanded.

“It’s a very sad incident. We should condemn the act but not the actor because there is due process to be observed. We were also surprised by the uproar,” Mendoza said.

She added: “In the end, he is the only one who can explain what he did.”

Another official who declined to be named said the incident had also cast doubts on Solis’ academic record at UP.

“If there is a complaint that some of [his] past papers were plagiarized, then UP can act on it,” the official added.

In his profile on the web site, which listed him as a member of the editorial board of one of IAPPS’ publications, Solis’ credentials included working for the Philippine Society for Public Administration, a nonprofit organization dedicated to improving public service in the Philippines and spearheading its three-year project called the “State of Good Local Governance in the Philippines” funded by the United Nations Development Programme.

According to his LinkedIn profile, he was an exchange student to Japan’s Kyushu University in 2010 to 2011 and won various awards and scholarships. Last year, he was also recognized by the Knights of Rizal as one of the country’s top 10 students.