Irene damage could be ‘tens of billions’—US governor 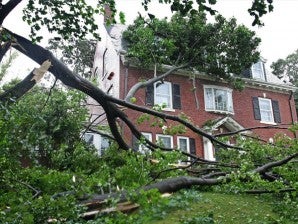 IRENE DAMAGE The limb of a large tree broken by Tropical Storm Irene lies against a house and in the yard in Providence, Rhode Island, Sunday, Aug. 28, 2011. The damage from Irene to the already battered US economy could reach tens of billions of dollars, according to New Jersey Governor Chris Christie. A.P. PHOTO/STEW MILNE

Christie gave his assessment, speaking on NBC news, as Irene caused widespread flooding and structural damage across a vast swath of the eastern US seaboard, from North Carolina to New York.

Irene weakened to tropical storm status Sunday as it crashed into New York City, the National Hurricane Center said, but the still powerful storm was flooding parts of lower Manhattan.

Experts said the financial toll would be much higher if, as transpired, there was a direct hit on New York, the US financial capital and largest city with nearly 19 million people living in its metropolitan area.

Kinetic Analysis Corp., a company that does computer modeling of predicted storm damage, predicted Friday that Irene would cause $5-10 billion in damages, based on the latest available weather data.

Losses could include damage to flooded buildings, business interruptions and cleanup costs picked by the government, said Chuck Watson, the company’s director of research and development.

Reporting on Sunday, the company said losses in North and South Carolina, the first states hit as Irene made landfall on Friday, are expected to range between $200 million and $400 million.

The costliest hurricane in US history was Katrina, which flooded New Orleans in 2005 and is estimated to have caused more than $100 billion in losses.