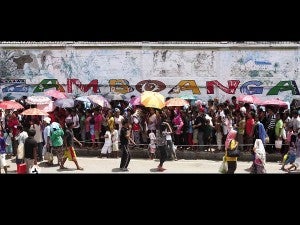 Residents displaced by fighting between gov’t troops and MNLF rebels join a long queue to get into an evacuation center at a sports complex in Zamboanga City on Friday, the 12th day of the urban warfare. EDWIN BACASMAS/INQUIRER FILE PHOTO

MANILA, Philippines – With no livelihood for two weeks since deadly clashes between government forces and the Moro National Liberation Front (MNLF) began, Zamboanga City evacuees are now relying on government support for their survival.

To ease the evacuees’ situation, the Department of Social Welfare and Development (DSWD) said they have started paying cash-for-work participants while the Social Security System (SSS) have offered assistance packages to their members in conflict-affected areas.

DSWD, in a statement released Sunday, said an initial 150 cash-for-work beneficiaries received their pay for assisting in the evacuation center’s community kitchen.

Social worker Agapita Bendoy said the participants worked for four to five days and were paid P210 per day or 75 percent of the prevailing regional daily wage.

She said the women tended to the cooking while the men were tasked to wash utensils, transport goods, and clean the area.

According to the statement, Omar Hasan, from the hard-hit village of Sta. Catalina, said the P450 he received for three days of work will be used to buy milk for his children.

SSS members will be allowed to renew their salary loans earlier, in addition to the waiving of the one percent service fee, while pensioners may advance their three month’s worth of receivables.

The deadline of applications for salary loan and advance release of pensions is on October 31, 2013 while applications for house repair and improvement loan with reduced interest rates will be accepted up to one year after the SSS Circular (to be posted in their website) is released.

De Quiros said applicants must not be more than 60 years old and have at least 24 monthly contributions “of which three are posted within 12 months prior to the month of filing of the application.”