PNP welcomes filing of raps vs cops in Atimonan shooting 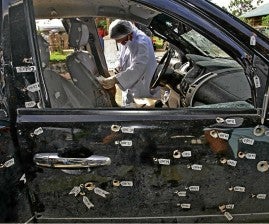 MANILA, Philippines—The Philippine National Police said Friday it welcomed the filing of charges against all police personnel implicated in the Atimonan shooting incident.

Speaking to reporters, Police Senior Superintendent Wilben Mayor, PNP spokesman, said that while the PNP has not formally been furnished a copy of the arrest warrant as of posting time, he said they are ready to serve it anytime to the 13 respondents, 10 of whom are currently in restrictive custody at the Headquarters Support Services (HSS) inside Camp Crame, Quezon City.

When the shooting incident happened in Atimonan, Quezon, early in January this year, all involved PNP personnel were reassigned to HSS and placed under restrictive custody to ensure their availability to face further investigation.

“They were ordered to report daily at the HSS,” Mayor said, noting that their attendance was being checked three times a day.

Asked if the respondents available at HSS will be moved to a detention facility when the warrant is served, Mayor said they would follow the location indicated in the arrest warrant.

As to the administrative case being handled by the Internal Affairs Service, Police Director Alexander Roldan, IAS director, said the last hearing was conducted last September 4, and the case was presently submitted for resolution.

“The PNP chief, Director General Alan Purisima, has directed the director of IAS to expedite the resolution of the case as soon as possible,” Mayor said.