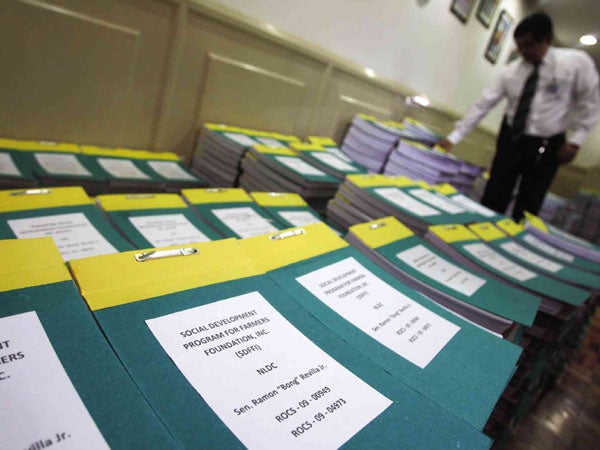 PORK SCAM EVIDENCE The National Bureau of Investigation shows to the media stacks of documentary evidence against Senators Ramon Revilla Jr., Jinggoy Estrada and Juan Ponce Enrile, and former Representatives Rizalina Seachon-Lanete and Edgar Valdez whom the NBI charged with plunder in the Office of the Ombudsman in connection with the alleged P10-billion pork barrel scam. NIÑO JESUS ORBETA

“In the beginning, we did not know if we could do it, but here we are now. We were guided by God.”

“This is something historic,” she told reporters at the headquarters of the National Bureau of Investigation after the Mass attended by former employees of Napoles, who revealed the alleged schemes of the businesswoman to channel allocations from the Priority Development Assistance Fund (PDAF) and other state funds into ghost projects through dummy nongovernment organizations.

De Lima called the whistle-blowers and their lawyer, Levito Baligod, “our heroes today.”

“We couldn’t have done it without you,” she said. “We hope we will remain strong.”

An executive summary of the NBI complaint filed in the Office of the Ombudsman said the three senators received a total of P581,140,750 in kickbacks for allowing Napoles to use their pork barrel allocations meant to ease poverty in the countryside and the plight of storm victims.

Two former members of the House of Representatives, according to the NBI, likewise received kickbacks and would be charged with plunder as well: Rizalina Seachon-Lanete, P108,405,000; Edgar Valdez, P56,087,500.

The heads of agencies charged with either plunder or malversation, bribery and graft and corruption were:

Finally, the implementing agency officials and employees involved in plunder or malversation, bribery, or graft by conspiracy are Victor Cacal and Romulo Revelo, Ma. Ninez Guanizo, Julie Johnson, and Rhodora Mendoza, all of Nabcor; Alexis Sevidal, Sofia Cruz and Chila Jalandoni of NLDC; and Francisco Jover and Marivic Jover of TRC.

The NBI executive summary said the lawmakers received 40 to 60 percent of the cash value of the cost of the project they had endorsed.

“These kickbacks are the lawmaker’s bribe for giving undue favor to a Napoles NGO, or represent his illegally contracted share from a malversation scheme designed to misuse and misappropriate public funds entrusted to him, and which he appropriates instead for private gain rather than the public benefit intended by law,” the NBI said.

“In order to accomplish all this, the lawmakers took advantage and abused their official position and authority as Senators and Congressmen of the Republic, thereby unjustly enriching themselves at the expense and to the damage and prejudice of the people and the Republic,” it said.

“The acts constituting the offenses were performed willfully, deliberately, and maliciously with the legislators knowing fully well that their act of receiving the large amounts of cash from Napoles for their private use resulted in the corresponding diminution of the funds actually expended for the public purposes intended by law.”

NBI Assistant Director Medardo de Lemos signed the NBI complaint, along with the private complaint of the whistle-blowers prepared by Baligod. The NBI recommended that the Office of the Ombudsman conduct a preliminary investigation to determine if the case merits prosecution in the Sandiganbayan.

Hours before receiving the NBI complaint, the Ombudsman announced with “regrets” it was clamping a news blackout on its investigations in the PDAF cases “to avoid any appearance of partiality or prejudgment.” This move was in stark contrast to the cases against former President Gloria Macapagal-Arroyo and in the impeachment trial of ousted Chief Justice Renato Corona when the Ombudsman revealed all available information it had in its possession.

In a statement, Communications Secretary Ramon A. Carandang said: “The filing of charges continues a process prescribed by the Constitution and is proof that our democratic system and our legal processes are working. All the accused will be given their day in court under a fair and impartial trial.”

The Inter-Agency Anti-Graft Coordinating Council (IAAGCC) continues its investigation and will file more charges as evidence warrants, Carandang said, referring to a parallel inquiry into the pork barrel scam.

“We urge the public to diligently and soberly follow this process that will be pursued to its legal conclusion,” he said.

The Bureau of Immigration said the 38 people charged would either be placed under its “lookout bulletin” or hold departure order depending on orders of the Department of Justice.

Napoles, 49, is being held at Fort Sto. Domingo, a Philippine National Police antiterrorism training school in Sta. Rosa City, Laguna, for the alleged illegal detention of Benhur Luy, the principal whistle-blower. She disappeared Aug. 14 after a Makati court issued a warrant for her arrest. She surrendered to President Aquino on Aug. 28, saying she feared for her life.

The NBI said the investigation of Napoles began after its rescue of Luy. The NBI said Luy was held captive by Napoles “in  order to prevent him from coming out and exposing what he knows about the PDAF scam operation being conducted by Napoles through the JLN group of companies and fake NGOs.”

Enrile was taken to Makati Medical Center on Saturday after he complained of difficulty in urinating,” said his son, former Cagayan Rep. Jack Enrile.

“As a result, his blood pressure became elevated,” the younger Enrile said in a statement last night. He said doctors found an obstruction in his urethra and immediately removed this.

“I regret that the Department of Justice has filed this case after an incomplete, hasty, and partial investigation,” Enrile said in a statement Monday night. “Let me make clear that I am innocent of the charges filed against me.”

Looking relaxed in a news conference, Estrada denied the charges and said he would face them squarely. “I will not leave the country. If ever I do, I will return and face the charges,” he said.

Revilla earlier called the charges against him a “demolition job.”—With reports from Gil C. Cabacungan, Jocelyn R. Uy and TJ A. Burgonio