Justice Secretary Leila de Lima on Monday said at a news conference at the Ombudsman office that in total 38 were facing charges over alleged conspiracy to divert P10-billion to dummy aid organizations and ghost projects in exchange for kickbacks.

De Lima said the five lawmakers allegedly committed plunder in conspiracy with Napoles and other officials of the implementing agencies when each accumulated more than the P50 million plunder threshold through a series of transactions over time through misappropriation, conversion, misuse, and malversation of the cash value of the project cost allocated from their PDAF and through their acceptance of kickbacks or commissions.

Three former representatives were also facing charges for involvement in malversation, direct bribery and other graft and corrupt practices. They are:

Mentioned last was Janet Lim-Napoles as co-conspirator of the accused lawmakers. 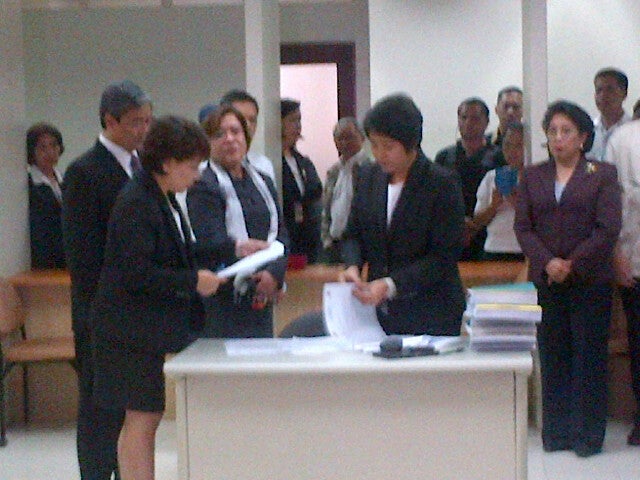 “As co-conspirator in the case of the five lawmakers being charged of plunder and 3 other lawmakers charged for malversation and corruption of public officials is Ms. Janet Lim-Napoles, the owner of JLN Group of Companies and believed to be the mastermind of the PDAF (Priority Development and Assistance Fund) scam operations,” De Lima said.

The Justice Secretary said they also recommended the filing of plunder or malversation charges against staff of the mentioned lawmakers, officials of involved government corporations and officers of Napoles’ non-government organizations.

Others facing charges include:

Also recommended to be charged with plunder of malversation were five employees of NABCOR, three from NLDC, and two from TRC:

The P10 billion pork barrel scam was first exposed by Philippine Daily Inquirer in a series of articles alleging the misuse of lawmakers’ PDAF through Napoles’ bogus non-government organizations.

On August 16, the Commission on Audit released a special report on the PDAF which revealed questionable practices on the release of the discretionary funds to lawmakers and dubious NGOs.

According to de Lima, the bulk of the evidence included the affidavits of the whistleblowers, copies of transactions and documents from the Commission on Audit and the Securities and Exchange Commission.

She said the Department of Justice hopes to further solidify these cases with the findings of the Anti-Money Laundering Council on the frozen bank accounts of Napoles as ordered by the Court of Appeals, courtesy of the “coercive” powers of the Ombudsman.

In the complaints, De Lima said the modus operandi was for lawmaker to get from Napoles 40 to 60 percent of the cash value of the project as kickback in exchange for selecting the NGO identified with her as recipient of his/her Priority Development Assistance Fund (PDAF).

She said the lawmaker first submits a list of properties
De Lima said in filing the cases, the NBI focused mainly on the criminal charges and that it was up to anyone to file other charges against the accused.

She said the NBI will also file next week the charges in connection with the misuse and abuse of the Malampaya Fund and the second batch of cases involving PDAF in two weeks. With a report from Cynthia Balana