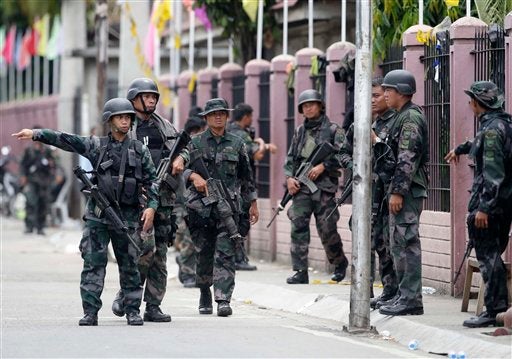 Government troops man an intersection where renewed fighting between government forces and Muslim rebels enters its second week Monday, Sept. 16, 2013 at Zamboanga city in southern Philippines. The standoff, which began last Monday when troops foiled an attempt by the rebels to march and hoist their flag at Zamboanga’s city hall. The rebels, who arrived by boat from outlying islands, barged into five coastal villages and took more than 100 hostages as human shields. (AP Photo/Bullit Marquez)

ZAMBOANGA, Philippines — Philippine troops have recaptured 70 percent of the coastal areas in Zamboanga City that were occupied by Muslim rebels, the military said, adding helicopter gunships were deployed for the first time Monday as a hostage standoff dragged to its second week.

Troops and special police forces have killed or arrested more than 100 Moro National Liberation Front rebels, who occupied five coastal villages, after government forces foiled what officials said was an attempt by the heavily armed insurgents to take control of Zamboanga city hall on September 8.

But about 100 rebels remained holed up with more than 100 hostages. Government troops were continuing a push against the insurgents but were wary of causing any harm to the captives, military spokesman Lieutenant Colonel Ramon Zagala said, adding it was difficult to say when the fighting will end.

Troops have tried to contain the clashes in the coastal outskirts of Zamboanga, a largely Christian city of nearly one million people, but suspected rebel mortar fire destroyed a car near the city’s downtown area Monday, raising fears the gunmen were attempting to divert the military’s attention.

Nearly 82,000 residents have fled the fighting into several emergency shelters, including the city’s main sports complex.

Interior Secretary Manuel Roxas II said about 850 houses had been destroyed amid fierce exchanges of gunfire and occasional bursts of mortar rounds and grenades. Police said some fires may have been deliberately set by rebels to cover their escapes.

President Benigno Aquino III is in Zamboanga to oversee the handling of the worst security crisis his administration has faced since he came to power in 2010.

The Moro insurgents, led by Nur Misuari, signed a peace deal in 1996, but the guerrillas did not lay down their arms and later accused the government of reneging on a promise to develop long-neglected Muslim regions in the south of the predominantly Roman Catholic nation.

The rebels have become increasingly restive in recent months as they’ve been overshadowed by a rival rebel group that engaged Aquino’s government in peace talks brokered by Malaysia. The talks have steadily progressed toward a new and potentially larger autonomy deal for minority Muslims in the south.