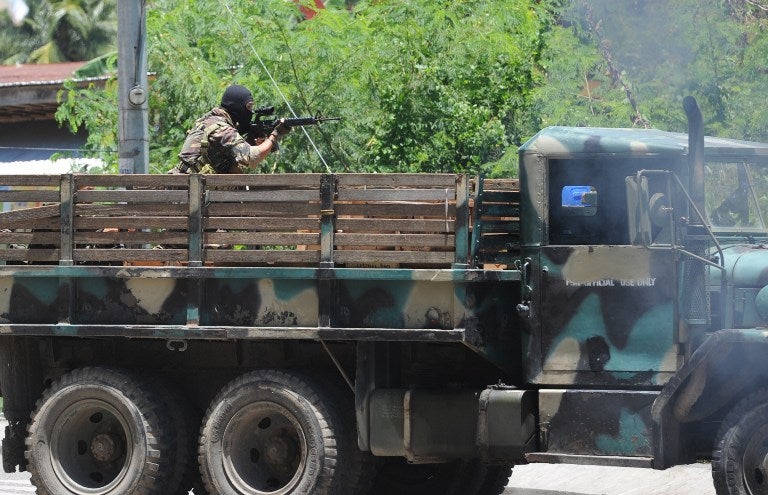 A Philippine soldier on board a truck aims his weapon towards rebel positions as the stand-off between the two sides enters its sixth day in Zamboanga on September 14, 2013. Philippine troops were clearing out the last remaining Muslim rebels after a six-day operation in the south that killed dozens of militants and allowed scores of hostages to flee, officials said on September 14. AFP PHOTO/TED ALJIBE

“The presence of the civilians is a big factor on the matter … We cannot just simply go after (the rebels) just like that because we might be hitting civilians in the process. And again the President’s directive is to ensure that the civilians are protected or not brought to harm’s way or not brought in the crossfire,” Armed Forces of the Philippines spokesman Brigadier General Domingo Tutaan Jr. told reporters in Camp Aguinaldo Monday.

“The reason we are doing a calibrated military operation as opposed to an all-out offensive is because of the presence of the civilians and hostages. I’m not saying it’s dragging. But we’re being careful,” said AFP public affairs chief Lieutenant Colonel Ramon Zagala II in a phone interview from Zamboanga City.

He said attack helicopters were deployed Monday for only a “short” period of time to provide “close air support” to the ground troops.

“It was limited, just enough to suppress. We will not use excessive combat power,” Zagala said.