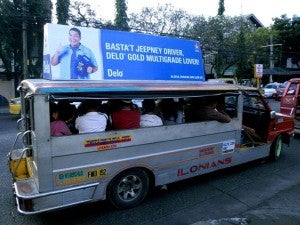 ILOILO CITY, Philippines — Jeepney drivers and operators in Iloilo City are seeking a 50-centavo increase in the minimum fare of public jeepneys.

The Icada is composed of around 18 associations with about 7,000 members.

The LTFRB conducted a public hearing on the petition on Monday to discuss the basis of the petition and the opposition from the public.

“We are reeling from continued increase in oil prices and the increase will only recover what we have lost in income for the past months,” Icada president Nick Dalisay told the Philippine Daily Inquirer.

“The rollback is not enough to recover our losses,” he said.

He said the fuel prices have increased 11 times this year alone, amounting to P7.45 per liter for diesel.

Dalisay said a provisional 50-centavo increase in the minimum fare was also implemented last year but the fare rate was returned to P7.50 after drop on oil prices.

“We only want a temporary increase because we are willing to lower the fare if oil price will also be lowered,” he said.

Edgar Salarda, coordinator for Panay of the Pinag-isang Samahan ng mga Tsuper at Operator Nationwide, said the petition for a fare increase was the “last resort” of drivers and operators amid high oil prices.

“An increase can be staved off or minimized if only government heeds our call to remove the 12 percent valued added tax on oil products, the repeal of the Oil Deregulation Law, which allows oil companies to set oil prices, and a stop to the alleged overpricing of oil products by oil companies by at least P7.50 per liter,” Salarda said.