Makabayan branded hypocrites for using pork funds, then calling for its abolition 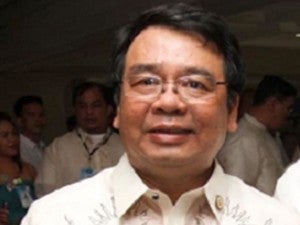 MANILA, Philippines—What do you call a group opposing the retention of the pork barrel system in the proposed 2014 after pigging out on P852 million in Priority Development Assistance Fund (PDAF) under the Aquino administration?

Cavite Rep. Elpidio Barzaga Jr., a member of the National Unity Party, said the Makabayan bloc, composed of militant party-list groups, should stop its “charade” of pushing for the abolition of the pork barrel because it did not abstain from partaking of pork when the group was given access to the fund in the 15th Congress.

“You just can’t say pork is bad or good when it suits your propaganda. They all claimed that their pork went to good causes, without graft and corruption, when they used it from 2010 to this year. So, why did they suddenly brand it evil now just because it’s the fashionable thing to say? Where is the conviction? Where is the integrity? Can you blame people for calling them hypocrites or two-faced?” said Barzaga.

He also supported the abolition of the Priority Development Assistance Fund (PDAF), the official name of the pork barrel of lawmakers, but he refused to actively push for the scrapping of the pork barrel system because he still believed in its merits if properly implemented.

“I think that they have lost the moral high ground to preach on the pork barrel issue because they were free to say `no’ to pork then,” Barzaga said of the the Makabayan bloc.

The proposed P2.268-trillion budget for 2014 is the first national budget in a long time that would not contain the lump sum PDAF.

Lawmakers could refer their beneficiaries of scholarships, medical assistance and the like to the concerned departments. As for infrastructure projects, they would still be able to propose these, but would have to identify them early for inclusion in the budget as a line item.

Isabela Rep. Rodolfo Albano III, a member of the minority group just like the Makabayan bloc, said he found it the “height of irony” that the same people who were “silent” when they spent  their pork in the last three years would be the “loudest” in Congress in pushing for the abolition of pork.

“They are my peers in the minority. But I believe that they missed a chance to continue accessing their pork because they could have put it to good use,” said Albano. “Now, they have nothing to do but count the rainwater dripping from the ceiling of Batasan.”

In a text message, Bayan Muna Rep. Neri Colmenares said that just like the public, the Makabayan bloc was “angry at the abuse and not the use” of pork.

“But because of (Janet Lim) Napoles, the call for the abolition of pork even for those who merely used it but did not [mis]use it was legitimate. So, even if we did not abuse, we believe it’s but proper for the people to call for its abolition. We’re just supporting the people’s call now,” said Colmenares in a text message.

Napoles is believed to be the mastermind in the P10-billion pork barrel scam that involved the channeling of 28 lawmakers’ lump sum funds to bogus NGOs in exchange for kickbacks in 10 years.

Benhur Luy, a former employee of Napoles, testified in the Senate last week that lawmakers, including a few senators, got kickbacks equivalent to 50 percent of the project cost.

Based on a Department of Budget and Management report on the use of pork barrel, the party-list lawmakers collectively known as Makabayan  — Neri Colmenares (P151.341 million) and Teodoro Casiño (151.675 million) of Bayan Muna; Luzviminda Ilagan and Emi de Jesus (P105 million each) of Gabriela; Antonio Tinio (P105 million) of Alliance of Concerned Teachers (ACT); Raymond Palatino (P84.995 million) of Kabataan; and Rafael Mariano (P148.845 million) of Anakpawis — were granted a total of P851.856 million in PDAF from 2010 to the first half of 2013.

In the first six months of the Aquino administration, all seven lawmakers received P35 million each, half the P70 million annual PDAF allocation.

In 2011, when then Chief Justice Renato Corona was impeached, each Makabayan representative received the full P70 million allocation except for Palatino who got P49.995 million.

In the first half of this year, only Colmenares (P10.375 million) received pork among his Makabayan peers. Curiously, Mariano (P14.55 million) managed to get pork among the Makabayan members in 2009 despite the the Arroyo administration’s zero pork release policy for her critics in Congress.

Nearly half or P391.856 million of their pork allocations were spent on “soft projects” in state universities, local government units and hospitals.

Despite the scrapping of the lump sum Priority Development Assistance Fund and its realignment to agencies, pork barrel questions would continue to hound the proposed 2014 budget, which has scheduled for plenary deliberations in the House of Representatives starting on Monday (Sept. 16).

Some lawmakers doubt that the re-channeling of Congress’ PDAF to the agencies would remove the pork barrel system that has been criticized for breeding patronage politics. They intend to raise this matter during the session

But Bayan Muna Rep. Neri Colmenares noted that Congress would still be able to exercise some form of control and discretion over the funds.

“Entitlement to nominate is what transforms a fund into pork,” said Colmenares, who disclosed that the Makabayan bloc would challenge in the plenary the claim that the pork barrel has been truly abolished.

Under the new plan, operators who cook up schemes to pocket pork could now shortcut the process and go directly to the departments, he said.

ACT Teachers Rep. Antonio Tinio, one of those critical of the move, planned to point this out in the plenary.

“I will first of all inquire as to how the appropriations committee intends to amend the general appropriations bill to insert their proposed changes, then proceed to establish through questioning that the pork barrel system for legislators will remain intact despite the so-called abolition of the PDAF,” he said yesterday.

Tinio earlier said that while the PDAF allocation had been “unbundled” and realigned to other agencies, the key features of the pork barrel were still in place.

According to him, these include the earmarking of specific amounts, the lawmakers’ exercise of individual discretion to provide for local infrastructure projects and the recommendation of beneficiaries to the executive agencies.

The Makabayan lawmakers also plan to call for the abolition of other lump sum funds in the budget, including the President’s own. The use of these funds had often escaped scrutiny.

“Without eliminating the lump sums in the budget which constitute presidential pork, the use of public funds for corruption, abuse, and patronage politics will not be abated,” Colmenares said.

He said the fight against all forms of pork barrel must continue.

“The people must not get distracted by attempts to deodorize pork now that we have the chance to deliver that fatal blow to the pork barrel system.”

The first day of plenary budget deliberations is reserved for the sponsorship speech, the debate on the general principles and provisions of the budget, and the allocations for the Department of Finance, National Economic and Development Authority, and the Legislative-Executive Development Advisory Council.

There is also a period allotted to discuss lump sum funds in the proposed 2014 budget. This is scheduled for Sept. 27, the last day of plenary deliberations.