‘Mina’ slows down after landfall in Cagayan 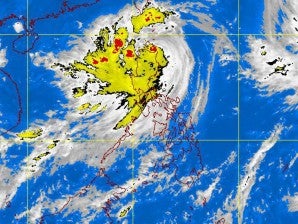 Signal No. 4 remains hoisted over northern Cagayan, including the Calayan and Babuyan groups of islands; No. 3 over Isabela, Apayao, the rest of Cagayan and the Batanes islands; No. 2 over northern Aurora, Quirino, Ifugao, Mountain Province, Kalinga, Ilocos Norte, Ilocos Sur, Abra, Benguet, and La Union; and No. 1 over the rest of Aurora, Nueva Vizcaya, Nueva Ecija, Pangasinan, Tarlac and Zambales.

Two hours after making landfall, Mina maintained its strength, packing maximum sustained winds of 195 kilometers per hour near the center and gustiness up to 230 kph.

“Since it has not moved in the last six hours, the Cagayan area is still in danger. It’s being whipped by strong winds and rains, specifically Gonzaga and Sta. Ana,” Robert Sawi, OIC of Pagasa’s weather branch division, said in a briefing.

This has spawned storm surges in the area, he added.

It’s forecast to move northwest at 7 kph, down from 9 kph earlier in the day, toward the Calayan and Babuyan groups of islands, and would be at 80 km north of Aparri, Cagayan Sunday morning.