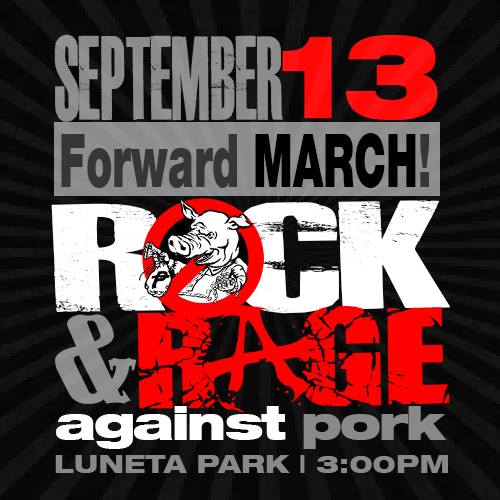 MANILA, Philippines – After a “picnic rally” and a prayer vigil, anti-pork barrel groups will stage a concert on Friday, in a bid to encourage younger people to join the campaign.

Father Joe Dizon told Radyo Inquirer 990AM Friday that at least twenty bands confirmed their attendance to the “Rock and Rage Against Pork!” concert at Luneta Park.

The priest, who led the interfaith rally last Wednesday at the “Edsa Tayo” prayer vigil, said they would first have a prayer gathering at 3 p.m., followed by a series of educational discussions before the 6 p.m. concert.

“We are expecting 10,000 [people] or more [to attend] and mostly youth, students. Because Catholic schools have allowed their students to attend,” he said.

On Monday, the Catholic Educational Association of the Philippines (CEAP) invited its member schools to participate in the Luneta Park activity and the 1 p.m. protest march from various areas in Manila.

“Rock and Rage Against Pork!” is the latest event protesting the government’s use of discretionary funds, after the August 26 “Million People March” and the September 11 “Edsa Tayo” prayer vigil.

Dizon said they would continue to protest the pork barrel system amid President Benigno Aquino III’s announcement of the abolition of the Priority Development Assistance Fund (PDAF) and the Supreme Court’s temporary restraining order on the remaining 2013 PDAF and Malampaya funds.

“Malacanang said they will abolish the PDAF but they did not remove it from the 2014 budget. [The President] merely changed the system. Nothing was resolved. That’s why the people are not satisfied,” he said.

Dizon said they would continue to organize such activities until the whole pork barrel system would be abolished; perpetrators are investigated and punished; and funds are channeled to housing, education, health and other social services.

The priest said they have secured a permit from the National Parks Development Committee for the concert.

“On Pork Day the 13th, we will continue the march with art, music and performances that take a stand against the pork barrel system!” said the event’s Facebook page.

Mae “Juana Change” Paner, who was among the invited personalities, told media she was excited for the event’s “lechon parade” and jail booth.

Also gracing the event is Jograd Dela Torre who composed the song “Kawatan,” now dubbed as the anthem of the anti-pork barrel movement.