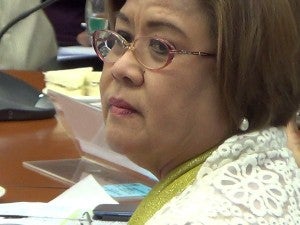 MANILA, Philippines—Justice Secretary Leila De Lima on Thursday vowed that her agency would not distinguish between administration and opposition legislators when it files the first batch of plunder charges by Monday.

“That’s our attitude now: whoever gets hit, so be it,” she said during the Senate blue ribbon committee hearing on the alleged P10-billion pork barrel scam.

“If you’re referring to the so-called partisan considerations, that charges would be filed only against the opposition and not administration allies—there’s no such thing, that I can tell you,” she added.

De Lima admitted that she “more or less” knew about the party affiliations of senators being considered for prosecution. But she said it was not so when it came to members of the House of Representatives.

“I don’t want to know the party affiliations of those congressmen, although I assigned one of my staffers to research on them. But I told [him] not to show it to me yet, so I really don’t know,” she said.

“In other words, what I’m saying here is that is not at all a consideration.”

Saying her agency was “under extreme pressure” to file cases already, she said the first batch of respondents would serve as “sample.”

“But even in making samples, we are very careful that the case should really have a basis, that it should be solid,” she said.

Despite requests from senators, De Lima stood pat on her decision not to name any of the legislators until cases were actually filed. She told Majority Leader Alan Peter Cayetano that it would only be a “matter of days” before the names were officially revealed.—With a report from Michael Lim Ubac