‘PORK’ WITNESS  Benhur Luy, the principal witness in the P10 billion “pork barrel” scam, testified for the first time before the Senate blue ribbon committee on Wednesday, Sept. 12, 2013, that Janet Lim-Napoles, his cousin and boss in the company he was employed in, was the mastermind of the scheme that involved the funneling of legislators’ “pork” or Priority Development Assistance Funds (PDAF) to fake non-government organizations formed by Napoles. Video by INQUIRER.net’s Ryan Leagogo

MANILA, Philippines – Benhur Luy, the  principal whistleblower in the  P10 billion “pork barrel”  fund scam, appeared and testified  in the Senate  on  Thursday.

No less than Justice Secretary Leila de Lima presented Luy as the first witness in the ongoing  investigation by the blue ribbon committee. 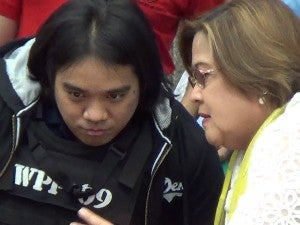 But in her opening statement,  De Lima requested the committee if her witness not name names and just be allowed to narrate how the alleged scam in the releases of legislators’ Priority Development Assistance Fund (PDAF) or “pork barrel” worked.

De Lima then requested for a five to ten minute-suspension to call her witness.

Before this, the  justice secretary revealed writing a letter to the committee to request not to summon the  whistleblowers in the scam as they would be  facing the very officials, whom they have  implicated.

In her letter to the committee, De Lima cited other reasons why the whistleblowers should not be summoned to the hearing  such as the danger of self-incrimination and their fear  for their security.

But De Lima said she reconsidered her decision, saying that the people should hear a representative from the whistleblowers. 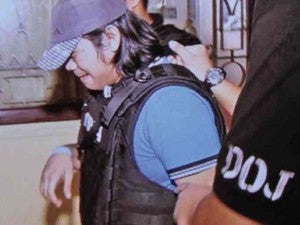 Meanwhile, Allan Javellana, former head of the National Agribusiness Corporation (Nabcor), which had been used allegedly as a conduit to transfer  the legislators’ pork barrel funds to fake NGos was a no show at the hearing.

Javellana was present during last week’s hearing where he confirmed meeting Janet Lim-Napoles twice at the Discovery Suites  in  Mandaluyong. He also  confirmed that Senator  Juan Ponce-Enrile, Jose “Jinggoy” Estrada, and  Ramon “Bong” Revilla Jr.  had funnelled their  PDAF to Napoles’ NGOs  through Nabcor.

Napoles has been tagged as the mastermind behind the scam. She is detained at the Fort Sto. Domingo in Laguna on charges of serious illegal detention over the abudction of Luy, a cousin and employee in her company which bears her initials, JLN.