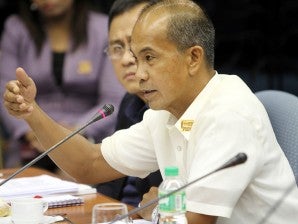 Versoza has turned himself in to the Sandiganbayan and posted bail of P30,000 for the graft case he is facing in connection with the P131-million allegedly irregular purchase of rubber boats by the PNP in 2008.

The antigraft court’s 3rd Division immediately recalled the warrant of arrest it issued against Versoza.

The antigraft court ordered the arrest of the eight after it denied their motions for a judicial determination of probable cause.

The Ombudsman filed graft charges against the ex-police officials last February for the allegedly irregular purchase by the PNP in 2008 of 75 rubber boats and 18 spare engine for the PNP Maritime Group under the Capability Enhancement Program Funds. The purchase was made by a negotiated sale and covered by four separate supply contracts finalized at the end of 2009.

The Ombudsman said that upon delivery of the first batch of rubber boats and outboard motors, the PNP Maritime Group, through its Technical Inspection Committee on Watercrafts (MG-TICW), found various deficiencies in the equipment, making them risky to users, while the boats and engines were not functional when fitted together, making them unusable for the PNP’s disaster operations.

The special panel of investigators that handled the case said the government suffered undue injury in the amount of P131.55 million from the irregular purchase of the boats.—Cynthia D. Balana