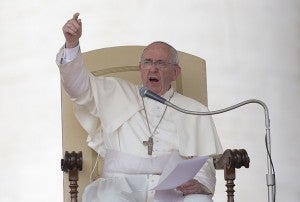 Pope Francis gestures as he reads a message during his weekly general audience in St. Peter square at the Vatican, Wednesday Sept. 11, 2013. Pope Francis has gotten his first Italian byline with a letter published on the front page of the Rome-based daily La Repubblica. The pope responded to a pair of letters from the daily’s founder and long-time editor Eugenio Scalfari, who posed a series of theological questions as a non-believer to the pontiff in the paper over the summer. AP PHOTO/ALESSANDRA TARANTINO

ROME—Pope Francis on Wednesday said atheists could take moral decisions just like religious people, in an unprecedented letter to a leftwing Italian daily—his latest attempt to reach out to non-believers.

“God’s mercy has no limits if we turn to Him with a sincere and contrite heart,” the leader of the world’s 1.2 billion Catholics said in a missive published in La Repubblica by its founder Eugenio Scalfari.

“The question for people who do not believe in God is to listen to their consciences. Also for those without faith, sin is going against your conscience,” he said.

“Listening to it and obeying it means making up one’s mind about what is good and evil,” he added.

The letter was the 76-year-old pope’s reply to questions posed in the newspaper in July and August by Scalfari, who had admitted to not believing in God.

Since being elected in March, the Argentine pope has repeatedly said he wants his words to be heard by faithful from other religions and non-believers.

During a blessing in St. Peter’s Square in May, Francis said non-believers could be redeemed just like Catholics—an unusual message that was quickly denied by a Vatican spokesman who said that anyone who refuses the Catholic Church “cannot be saved.”