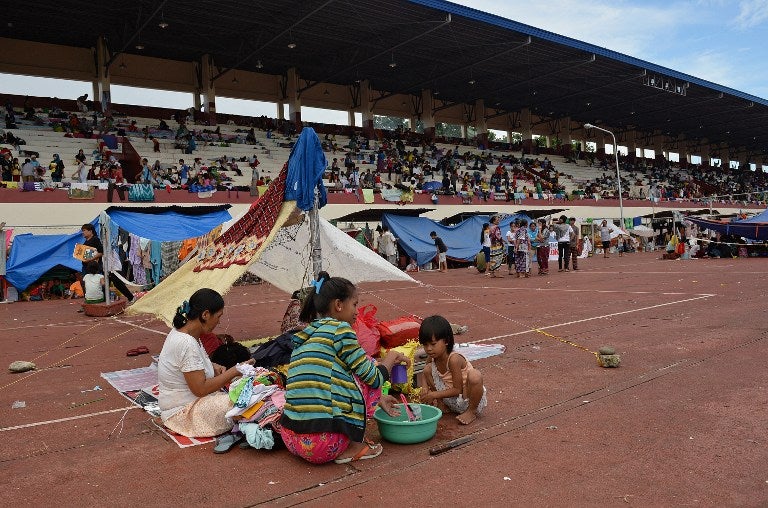 Residents living along the coast near the area of a stand-off between the Philippine military and Muslim gunmen take shelter at a sports complex used as a temporary evacuation center in Zamboanga on the southern Philippine island of Mindanao on September 11, 2013. Muslim militants were using 180 residents as “human shields” on September 10, Philippine officials said, as they traded gunfire with troops amid burning houses during a standoff after a deadly attack on a southern city. AFP/ TED ALJIBE

At least 13,000 people crammed into Zamboanga city sports stadium seeking safety as soldiers and rebels fought street battles in deserted coastal neighborhoods nearby, an AFP photographer on the scene said.

“We’re trying our best to provide decent facilities for them,” government social worker Beth Dy told AFP, but added the venue only had four portable toilets and no available bedding.

About 5,000 residents from the six communities under siege arrived overnight and some had no choice but to pitch makeshift tents on the grass, she added.

In the settlement of Santa Catalina, three kilometers (1.9 miles) away, Philippine marines exchanged fire Wednesday with gunmen who were using 10 residents on a roadside as apparent human shields, an AFP photographer said.

One of the residents was waving a white cloth tied to a pole, he added.

The six communities are home to 160,000 mainly Muslim residents, according to local officials, who said about 180 residents were being used as “human shields” by the gunmen.

The siege began four weeks after MNLF founder Nur Misuari declared “independence” for the Muslim regions of the mainly Catholic nation and urged his followers to besiege government installations.

The MNLF ended a 25-year rebellion with a 1996 peace treaty, but Misuari’s faction laid a similar deadly siege on Zamboanga in 2001 that led to his imprisonment until 2008, when all charges against him were dropped.

The latest attack on Zamboanga is led by a top Misuari lieutenant, Habier Malik, and has left 12 people dead and 21 others injured, said military spokesman Lieutenant-Colonel Ramon Zagala.

The latest fatality was an MNLF gunman whose body was recovered in one of the areas where the gunmen are holed up, he said in an interview on ABS-CBN television.

Zamboanga mayor Maria Isabelle Climaco Salazar told the station that local officials had been negotiating with Malik to free residents and leave the city, without much success. She said Misuari could not be found.

“Our main priority really is the safety of all the hostages. The military should come in and try to secure the hostages and defend the city from further intrusion,” she added.

There has been some confusion over whether the residents are being held against their will and the government Tuesday said it was investigating whether they were hostages.

“It appears that what happened is not hostage-taking but more of them being turned into human shields by the MNLF forces who entered their communities,” Interior Secretary Mar Roxas said.

Zagala said the troops only had orders to surround the gunmen at this point, ensure the safety of the residents and prevent the crisis from spreading to other areas.