MANILA, Philippines — Rev. Fr. Nilo Mangussad, rector of Edsa Shrine, on Wednesday called on Filipinos to be vigilant and pro-active in their lives. 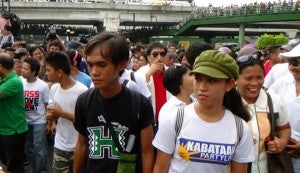 Addressing hundreds of Edsa Tayo participants inside the church, Mangussad urged the people to be vigilant not for revenge but for enlightenment.

Edsa Tayo is the second major event to call for the abolition of the pork barrel system following the Million People March on August 26. Public clamor against discretionary funds came about after reports of large-scale corruption involving lawmakers and bogus non-government organizations.

During the mass, the people prayed for those in power to be enlightened and realize that “the alms they give to the poor are not an alternative for social justice.”

As people filed out of the church, a woman wearing a veil and a large cross shouted for an end to the oppression of the Filipino people. She was later asked to stop.