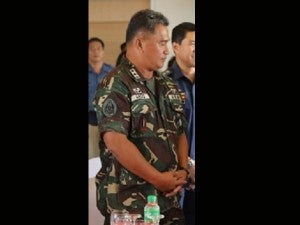 ZAMBOANGA CITY, Philippines – The military’s Western Mindanao Command has called on all residents to “stay calm, vigilant and ready” against the possible entry of Moro National Liberation Front members in this city and in other parts of the Western Mindanao region.

General Rey Ardo, the Wesmincom chief, said he has dispatched additional troops to Zamboanga City from Zamboanga Peninsula and Basilan – the 44th Infantry Battalion in Zamboanga Sibugay and two companies from Basilan.

“We have enough troops – the 32nd IB, Task Force Zamboanga, Air Force, Marines, Navy and Police – securing the entire city. Reinforcements (are intended) to secure to outskirts and main highway leaving and getting inside the city,” Ardo told the Philippine Daily Inquirer by phone.

Ardo said for more than three days, “we’ve been monitoring their movements and apprehended some of them last night (Sunday, September 8) but some managed to board commercial vessels and they were able to secure firearms from their local allies and relatives in Zamboanga City.”

Ardo said he could not give the actual number of MNLF forces who attacked Zamboanga City, but “we know it’s Habier Malik is leading the group while Nur Misuari is in Talipao (Sulu).”

Malik is a Sulu-based MNLF commander.