MANILA, Philippines – Thousands of commuters were inconvenienced Monday morning when a section of the Light Rail Transit (LRT) line 1 had to be closed due to a tripped power cable.

At around 10a.m., passengers from Roosevelt station in Quezon city going to Baclaran in Pasay city were made to get off at Monumento station while those from Baclaran had to get off at Blumentritt station.

The train driver announced that there was a technical problem at R. Papa station which caused that section to be closed off. 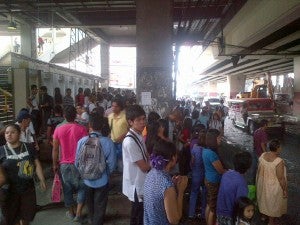 Commuters resort to taking jeepneys after being made to alight the LRT train at Monumento station. A technical problem at R. Papa station has closed off the Roosevelt to R. Papa line leaving only the Baclaran to Blumentritt portion operational.

LRTA spokesman Hernando Cabrera said in a tweet that “a section of the power cable located somewhere between RPapa Station and Abad Santos Station tripped. Repairs on going.”

However, Cabrera said around 11am that further problems caused the entire Roosevelt to Carriedo section to be closed.

A total of 11 stations out of 20 were closed because of the incident.

Tempers flared at Blumentritt station when passengers who shelled out extra money for a jeepney fare found out that they would still not be able to ride the train.

LRTA personnel at Blumentritt refused entry to the angry commuters, saying that they could not give an explanation other than they were simply told that only the Central – Baclaran line will be operational.

The LRT line 1 has been plagued by technical problems causing many incidents of stopped operations.

Read Next
Malacanang strongly condemns Zamboanga City attack
EDITORS' PICK
SWS: Over 12M Filipinos still jobless as of May 2021
Dizon: 40 of 119 ‘Build’ projects done by 2022
Smart celebrates all kinds of ‘#SimplyLove’ for Pride Month
Spread of Delta variant ‘prevented’ –expert
Smart brings KCON:TACT especially 4U to subscribers from June 19 to 27
SANTIS Delicatessen: The road to survival is sweet and savory
MOST READ
William Martinez sometimes feels his kids ‘don’t remember’ him anymore
Landmark tale of corruption
ICC case vs Duterte may take 3 months in pretrial body
Dizon: 40 of 119 ‘Build’ projects done by 2022
Don't miss out on the latest news and information.