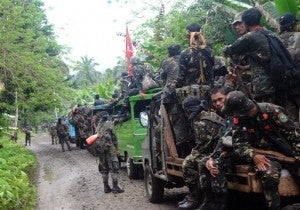 MANILA, Philippines – Up to 30 hostages have been allegedly taken by heavily armed members of the Moro National Liberation Front (MNLF) after a fierce clash with  government troops in Zamboanga City on Monday that left  one naval special forces member  dead, authorities said.

Vice Mayor Cesar Iturralde told INQUIRER.net that the group was demanding to put up their flag in the government city hall.

“Hopefully we will be able to get the civilians and engage them properly,” he said in a radio interview.

The MNLF has penetrated the villages of Talon-Talon, Rio Hondo, Mariki, Sta. Catalina, Sta. Barbara, and Arena Blanco as of posting time.

Zamboanga City government also suspended classes in all levels as well as work in government offices.

The firefight, which started Monday dawn, between government troops and the MNLF is still ongoing.