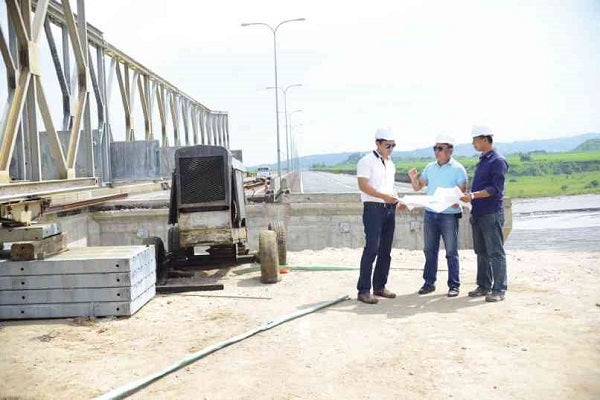 ENGINEERS from the Bases Conversion and Development Authority and the Department of Public Works and Highways inspect the assembly of the Bailey bridge at Subic-Clark-Tarlac Expressway.

CITY OF SAN FERNANDO— With a Bailey bridge safely in place over the damaged approach of the Pasig-Potrero bridge, the Clark-Porac segment of the Subic-Clark-Tarlac Expressway (SCTEx) would reopen to traffic Tuesday, Bases Conversion and Development Authority (BCDA) president Arnel Casanova announced  on Saturday.

The temporary structure, which came from the Department of Public Works and Highways (DPWH), is made of steel plates and posts held together by bolts or welded together. The DPWH and BCDA put it up in nine days.

The reopening at 2 p.m. on Tuesday comes 23 days after lahar remobilized by heavy rain dumped by Tropical Storm “Maring” damaged the embankment of the Pasig-Potrero bridge and caused the approach across four lanes to collapse on Aug. 19, leaving a gap of some 2 meters.

“We recognize the vital role of the SCTEx in the socioeconomic growth and development of Central Luzon being the main artery in the delivery of goods and services in the region. That is why the BCDA made sure that the closed segment of the toll road be open to traffic at the least possible time without compromising the safety of the motorists,” Casanova said in a statement.

In a text message, Casanova said it cost the BCDA  P1.6 million to install the Bailey bridge.

Laid out on the Clark-bound section, the bridge has two opposite lanes, providing access to and from Clark and Subic free ports, said Joseph Bingcang, SCTEx services manager of the BCDA, in the same statement.

The temporary bridge, spanning 49 meters and which can carry 25 tons, will be open to Class 1 or light vehicles in the meantime. Medium (Class 2) to heavy (Class 3) vehicles can pass through it in the next two weeks after additional support structures are put in place.

A BCDA advisory said Class 2 and Class 3 vehicles coming from Metro Manila or Tarlac going to Subic Bay Freeport (Tipo exit) should exit at the Clark South interchange. From there, these should take the Clark Friendship-Manibaug Road going to Porac interchange to enter SCTEx.