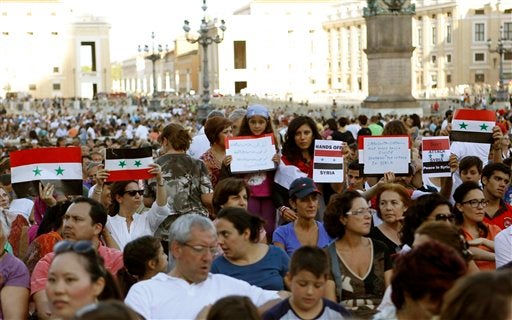 People hold Syrian flags and signs against a possible attack to Syria, prior to the start of a vigil for peace attended by Pope Francis in St. Peter’s Square at the Vatican, Saturday, Sept. 7, 2013. Tens of thousands of people have answered Pope Francis’ call and massed in St. Peter’s Square for a 4-hour-long prayer vigil for peace in Syria. It was believed to be one of the first, and certainly the largest popular rally in the West against U.S.-led plans to strike Syria following the Aug. 21 chemical weapons attack near Damascus. AP

VATICAN CITY — Tens of thousands of people filled St. Peter’s Square for a four-hour Syria peace vigil late Saturday, answering Pope Francis’ call for a grassroots cry for peace that was echoed by Christians and non-Christians alike in Syria and in vigils around the world.

The Vatican estimated about 100,000 took part in the Rome event, making it one of the largest rallies in the West against proposed U.S.-led military action against the Syrian regime following the Aug. 21 chemical weapons attack near Damascus.

Francis spent most of the vigil in silent prayer, but during his speech he issued a heartfelt plea for peace, denouncing those who are “captivated by the idols of dominion and power” and destroy God’s creation through war.

“This evening, I ask the Lord that we Christians, and our brothers and sisters of other religions and every man and woman of good will, cry out forcefully: Violence and war are never the way to peace!” he said.

“May the noise of weapons cease!” he said. “War always marks the failure of peace, it is always a defeat for humanity.”

In Damascus, a few dozen Syrian Christians attended a service in the al-Zaytoun Church, joining Francis’ invitation for a global participation in the day of fasting and prayer and to oppose outside military intervention in the conflict.

Greek Catholic Patriarch Gregorios III Laham of Antioch and All East presided, saying most countries supported a political solution to the crisis in Syria and few wanted military action. “This is the start of the victory,” he told the Damascus faithful. “No to war. Yes for peace.”

In Washington, at least 150 protesters picketed in front of the White House and marched to Capitol Hill to voice their opposition to a U.S. military strike in Syria. Anti-war protests were also held in other U.S. cities, including one in New York City’s Times Squares and a prayer vigil in Boston that echoed Saturday’s massive gathering at the Vatican.

Medea Benjamin, a founder of the anti-war group Code Pink, said a cross-section of Americans, many of whom disagree on a variety of issues, are united against military intervention.

“We have suddenly found ourselves united as Americans, overwhelmingly saying we will not let you drag us into another war,” Benjamin shouted into a megaphone in front of the White House.

Francis announced the day of fasting and prayer Sept. 1, alarmed at the acceleration of U.S. threats to strike Syria after the chemical weapons attack.

Since then, the Vatican has ramped up its peace message, summoning ambassadors for a briefing by the Holy See foreign minister this week. Francis appealed directly to world powers at the Group of 20 meeting in Russia, urging them to abandon the “futile pursuit” of a military solution in Syria and work instead for a negotiated settlement.

Bishops around the world joined Francis in the daylong fast and organized similar vigils in their home dioceses. In Francis’ native Argentina, human rights and religious groups held a vigil in Buenos Aires’ Plaza de Mayo and in cities across the country. Vatican Radio reported similar initiatives were taking place throughout Italy, in Cuba and elsewhere. Even the grand mufti of Damascus, who thanked the pope for his initiative in a letter earlier this week, invited Muslims to join the fast in solidarity.

Vatican officials have stressed that Saturday’s event was religious, not political. But the gathering nevertheless took on the air of an anti-war rally, with protesters holding up Syrian flags and banners in the square reading “Don’t attack Syria” and “Obama you don’t have a dream, you have a nightmare.” A few rainbow “Peace” flags fluttered in the breeze.

But by the time the vigil got underway, the posters and flags had mainly disappeared as a more religious tone took over, with leaders from a variety of Christian and non-Christian denominations joining cardinals, politicians and ordinary folk for the evening of prayer, hymns and meditation.

The pope entered the square from the basilica steps, foregoing his usual high-spirited drive through in his open car — an indication of the sobriety of the evening, which capped a day of fasting for the pontiff.

The 76-year-old pope held up well throughout the four hours — lasting longer than many who by the vigil’s 11 p.m. conclusion had already gone home. He thanked those who had stayed to the end for their company, and wished them a good night’s sleep.

The peace vigil marked something of a novelty for the Vatican: Nothing of its kind has ever taken place in St. Peter’s Square, though popes past have participated in daylong peace prayers in places like Assisi, known for its peace-loving native son and the pope’s namesake, St. Francis.

That’s not to say popes haven’t taken vigorous anti-war positions in the past: Pope Paul VI famously uttered the words “War never again, never again war” at the United Nations in 1965 as the Vietnam War raged, a refrain that has been repeated by every pope since. Pope John Paul II sent an envoy to President George W. Bush on the eve of the 2003 U.S.-led invasion of Iraq urging him to stand down — to no avail.

Francis has condemned the use of chemical weapons in Syria, but has been careful not to lay blame on any one side, exhorting world leaders instead to focus on the plight of Syrian civilians and the need in general to end the violence.

Other church officials, both at the Vatican and in dioceses, have been more pointed in their criticism of any internationalization of the conflict, saying U.S.-French military strikes will only exacerbate the situation for civilians, particularly Christian minorities.