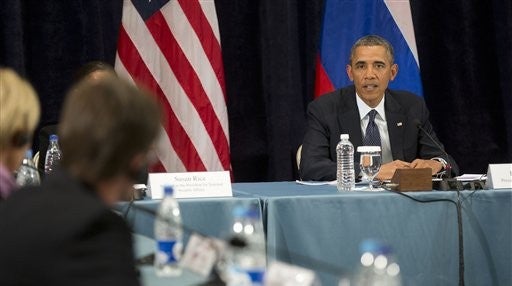 ST. PETERSBURG, Russia — Before leaving for home after the Group of 20 summit, President Barack Obama sat down with nine Russian civil society activists on Friday evening to assure them that he would keep pressing the Russian government to respect human rights, some of the activists said. But Obama also explained to them why this was not always possible.

“He was telling us how difficult it is for him to raise these issues, especially in relations with Russia and China,” said Pavel Chikov, who heads Agors, a legal aid nongovernmental organization.

Yana Yakovleva, head of business advocacy group Business Solidarity, described the meeting with Obama as “open and sincere.” Obama, who said that he draws inspiration from rights activists like them, told them that the U.S. administration has to think carefully before poking the Russians, she said.

“His main message was that there’s a lot of differences between the two great powers, and that while deciding which issue to raise they have to weigh carefully the impact it may have on relations on the whole,” Yakovleva said.

Igor Kochetkov, the head of LGBT Network, who attended Obama’s meeting with the civil society activists, said they pushed him to be more outspoken in his criticism of the rights situation in Russia.

“We asked him to be more open while assessing the human rights situation in other countries, including Russia,” Kochetkov.

After meeting with the activists for an hour and a half, Obama headed back to the United States.