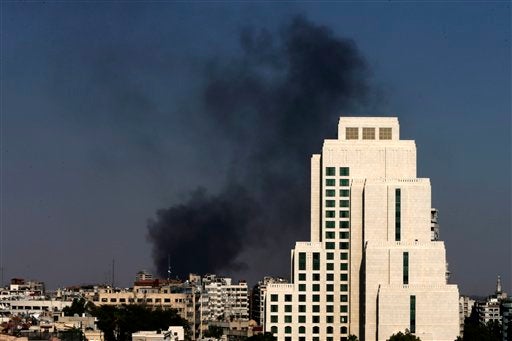 This Aug. 25, 2013 file photo shows black columns of smoke rising from heavy shelling in the Jobar neighborhood in East of Damascus, Syria. The Obama administration is sure about one thing: Syrian President Bashar Assad’s regime must be punished after allegedly using deadly chemical weapons, possibly including sarin gas, to kill hundreds of its own people. AP

VILNIUS, Lithuania — Secretary of State John Kerry is in Europe courting international support for a possible U.S. strike on the Syrian regime for its alleged use of chemical weapons.

Kerry, the Obama administration’s chief salesman for a U.S. punitive strike, landed late Friday in Vilnius, Lithuania, and will meet Saturday with European officials about the Syrian crisis and update them on ongoing peace talks between Israel and the Palestinians.

But a vote on Capitol Hill to authorize a strike is not certain, and Kerry is using his European trip to shore up international backing.

He also plans to meet with Palestinian President Mahmoud Abbas on Sunday in London.