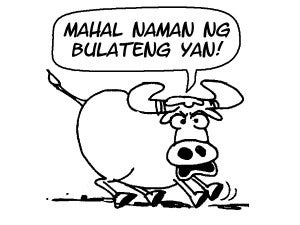 ZAMBOANGA CITY, Philippines—Here’s literal proof that indeed, the early bird—or in this case, the early trainee—gets the worm.

Some 2,000 farmers from the second district of this city got a bagful of worms each in 2012 after attending a training program on organic farming that included vermiculture, or the use of worms in loosening up the soil and in composting.

The farmers were described as beneficiaries of the P17 million that former second district Rep. Erico Basilio Fabian gave to the National Commission on Muslim Filipinos (NCMF), according to a report by the Department of Budget and Management (DBM).

The worms cost about P700 a kilo last year.

NCMF director Mehol Sadain confirmed to the Inquirer that the group received the funds from Fabian.

“He sent official letters identifying two (nongovernment) organizations (NGOs) that would implement his projects,” Sadain said. “We are now validating and authenticating the documents submitted to us and have contacted the organizations concerned for further clarification.”

Sadain identified one of the NGOs as BL Touch.

Dennison Abidin, acting regional director of NCMF in this city, said he was unaware that the NCMF got funds from Fabian’s Priority Development Assistance Fund (PDAF), also known as pork barrel, because “the transaction was between Congressman Fabian and the representatives from our national office.”

Abidin confirmed that the NCMF had conducted a training proper for farmers in Barangay Sangali here, but said that he had never heard of the NGO BL Touch.

City agriculturist Diosdado Palacat said he had not heard of BL Touch, either, although he recalled that his office had received a call from Fabian’s staff last year regarding a training on organic farming.

“I was directed to prepare farmers for a training. We invited about 2,000 farmers from the second district under Fabian and we had two training sessions on organic farming: On vermiculture and vermicomposting,” Palacat said.

He added that after the activity, the 2,000 farmer-trainees went home “with a supot of bulati (bag of worms)” that, Palacat said, cost about P700 a kilo at that time.

Fabian had repeatedly said that the expenses under his pork barrel were legitimate.

Sadain said the NCMF never got money from then Rep. Ma. Isabelle Climaco in 2012.

An Inquirer research, however, showed that Climaco had asked for the release of some P8 million in PDAF that was eventually rerouted to a health facility.