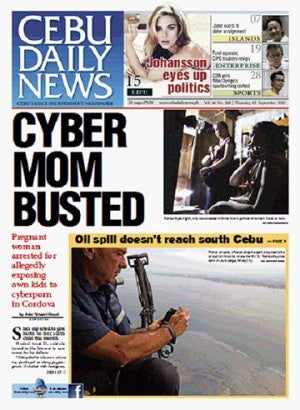 She’s expected to give birth to her sixth child this month.

Maricel Ayad, 31, said she turned to the Internet to earn money for her delivery.

“Nakig-chat ko nila aron aduna koy pambayad sa akong pagpanganak. (I chatted with foreigners, hoping to get money from them so I can pay for the bills when I give birth),” she told Cebu Daily News.

A police task force yesterday arrrested her at home where she allegedly exposed her five young daughters to cyberpornography in barangay Ibabao, Cordova town in the southern coast of Mactan island in Cebu.

At around 5 p.m., police officers from the Regional Anti-Human Trafficking Task Force barged into Ayad’s residence while her children were about to go online.

The youngest child — a 3-year-old girl — was naked while the others were in their underwear when the police entered the house.

A computer and video camera were confiscated.

Ayad and her live-in partner Dionesio Inoc were arrested. They will be charged with violating Republic Act 9208 or the Anti-Trafficking in Persons Act.

The children aged 11, 10, 7, 6, and 3 were turned over to the custody of the Department of Social Welfare and Development (DSWD).

Since the victims are minors, the case falls under qualified trafficking, a non-bailable offense.

“On our part, we have been doing everything to fight cyberpornography. But our opponent is easy money. We’ll have to continue conducting raids,” she added.

Magpale, who also chairs the Provincial Women’s Commission (PWC), said authorities have identified those involved in cyberpornography in Cordova as well as in other localities in the province.

“We’ve been saying that the issue on cyberpornography is alarming. There will be no letup in our campaign. If only they know how deep the wounds they inflict on children who fell prey to cyberpornography,” she said.

“I pity that child as well as her siblings. We will do our best to continue the fight against cyberpornography so we can rescue other victims,” said Gubalane who went to Cordova.

Senior Insp. Maria Theresa Macatangay of the Regional Anti-Human Trafficking Task Force said an informant tipped them off about the couple’s activities.

“We don’t have to wait for the children to perform lewd actions in front of the web camera. We immediately arrested the suspects because the intent was there,” Macatangay said.

The operation was carried out with the assistance of the US Department of Homeland Security and the International Justice Mission. Macatangay said they secured lewd pictures of “minors for sex” from the suspects.

In an interview, Ayad, the mother, admitted that she used to perform lewd acts in front of the web camera for foreign clients. But she denied involving her children.

Ayad, a laundrywoman, said she had stopped engaging in cyberpornography for some time, but decided to do it once again to earn money for the hospital bill s when she delivers her sixth child. She denied performing lewd acts.

“Nag istorya-storya naman lang mi sa mga foreigners. Dili man tanang foreigners mo-request nga maghubo ko. Naa may maluoy unya mohatag nga walay condition. (I only talked with foreigners recently. Not all of them ask me to get naked. Some of them give money out of pity. They don’t ask for anything in return),” Ayad told CDN.

Asked if her children could vouch for her, Ayad paused and said “Motug-an gyud sa tinuod ang mga bata. Kon unsay ilang nakita nako, ilang i-istorya. (Childen will tell the truth. They will reveal whatever actions they saw.)”

Her live-in partner Inoc said he was surprised when authorities raided their house.

Inoc said he works as a pedicab driver and sometimes accepts construction jobs. But he admitted that foreigners give them money for their children.

Inoc said a certain Peter, an American, recently sent money for them to buy school supplies for the children as well as food for the family.

“Ang ako mang asawa ang nag-transact ana ni Peter. (It was my wife who transacted with Peter),” he said.

Inoc said they are even grateful to Peter for helping them.

Inoc said a certain John, also an American, used to send money to them. He said they used the money to repair their one-storey house.

Inoc cried upon learning that he would be separated from his children.