Preserving Cebuano and other languages 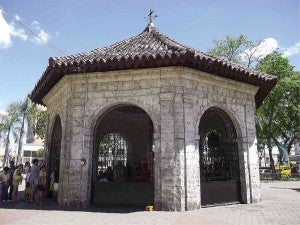 The Cebuano language is the first documented Philippine language when Antonio Pigafetta wrote down several words in his account of the Magellan expedition. Shown here is the kiosk of Magellan’s Cross, a famous landmark and veritable symbol of Cebu and of the Cebuano. FILE PHOTO

August is National Language Month because it is the same month when the father of Philippine language, the late President Manuel L. Quezon, himself a Tagalog, was born.

Filipino, which is mainly based on Tagalog, is recognized as the national language, but  the “Buwan ng  Wika  (Language Month)” is mainly devoted to Tagalog alone—to the detriment of more than a hundred other languages spoken in the country.

Although there is no more hindrance to Tagalog’s becoming the future lingua franca of the country, this can also mean the death of some 180 local tongues.

This is not farfetched.

Latin used to be the lingua franca of the world, but then it was easily edged out and is considered a dead language today.

Even the languages used in wider communication can face eventual extinction, like what befell the Agta, Dicanay; Agta, Villa Viciosa; Agta, Tayabas; and the Kalabanga.

Ten other languages are regarded as dying, classified as either moribund or nearly extinct, with speakers ranging from 150 to 9,700. These are the Bontok, Northern; Bontok, Southern; Dumagat, Remontado; Agta, Alabat Island; Agta, Isarog; Arta; Ata; Ayta, Sorsogon; Ratagnon and the Tagbanua, Central.

Four decades later, Tagalog exponentially rose to the top, taking over Cebuano. By then, the difference is already overwhelming.

It used to be that Cebuano was spoken in greater parts of the Visayas and Mindanao. Today, it is spoken mostly in Negros, Cebu, Bohol, Leyte, Biliran and south Masbate provinces, and some parts of Mindanao, according to www.ethnologue.com.

While it is considered the statutory language of Cebu, it also has its dialects. Porohanon (spoken by those from Poro town on Camotes Island) and Bantayanon (those from the Bantayan islands) are just two of them.

Comparing the results of both censuses, it could be deduced that the number of Tagalog speakers shot up significantly with almost 5 million speakers, while the number of Cebuano speakers drastically dropped by almost the same figure.

While the number of speakers of other languages also increased, Binisaya’s rise was very impressive with almost 6 million speakers added.

Why then is there a difference between Cebuano and Binisaya?

The Bisaya is one who comes from any place in the Visayas or Mindanao who speaks either Cebuano, Hiligaynon or Waray-waray. Since Binisaya is often equated as Cebuano, how come both are segregated? Census people must have been confused on this matter.

Granting that Cebuano is separate from Binisaya, the sharp decline in the number of speakers is a cause for alarm. It could further drop and eventually become extinct.

Though the 2010 census did not define Binisaya, it is plausible that it would refer to variants of Cebuano, specifically Cebuano mixed with other languages.

The decline of Cebuano as a top language spoken in the Philippines can be attributed to the government’s sponsorship of Tagalog, using it as an official language of communication in state offices and in schools all over the archipelago.

Conversely, its wide use by mass media, particularly on national television, is another reason Cebuano had been edged out of the top spot.

Although Cebuano can no longer regain its lead, the  people’s continued use of their own language will ensure its survival. This would again depend on the government’s unflinching support for other languages to flourish.

It is only when the government recognizes the importance of all other local languages spoken all over the country will the National Language Month become meaningful.

Otherwise, it will be merely a celebration of a victorious imperialist language rammed in everyone else’s throat.