Estrada, Misuari and other high-profile prisoners of Fort Santo Domingo 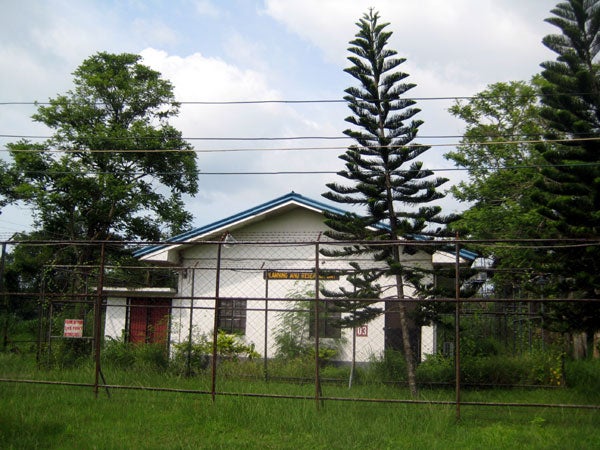 This office building inside the Fort Santo Domingo served as the detention cell of former president Joseph Estrada and Nur Misuari, chairman of the Moro National Liberation Front when they were separately incarcerated in the police training camp in Sta. Rosa, Laguna. CERES DOYO/INQUIRER

MANILA, Philippines—Fort Santo Domingo, where Janet Lim-Napoles will be locked up, is the same police camp where high-profile prisoners such as former president Joseph Estrada and Moro leader Nur Misuari were detained.

Estrada, now Mayor of Manila, was jailed in a special cell inside the camp following his ouster over allegation of massive corruption in 2001. His son, then San Juan Mayor Jose “Jinggoy” Estrada, was also detained inside the sprawling training camp of the Philippine National Police in Sta. Rosa, Laguna, about 38 kilometers south of Manila.

Estrada was initially held in custody at Camp Crame, the police national headquarters in Quezon City, but security risks compelled the Sandiganbayan to order his transfer to Fort Santo Domingo. He was later placed under house arrest at his rest house in Tanay, Rizal in 2003 until he was given executive clemency by President Gloria Macapagal-Arroyo in 2007.

Misuari was imprisoned in the camp after being arrested on charges of rebellion on November 24, 2001.

Senator Gringo Honasan, meanwhile, was detained in the camp in 2006 after his arrest on charges of rebellion following the 2003 Oakwood mutiny, where a group of 321 soldiers took over the Oakwood Premier Ayala Center in Makati City to demand for military reforms and resignation of Arroyo.

The Criminal Investigation and Detection Group opted to place Honasan in Fort Santo Domingo after he was discharged from the Asian Hospital in Muntinlupa City for treatment of injuries he sustained while attempting to elude arrest.

The PNP’s Special Action Force is headquartered in the Laguna camp.

Napoles to seek transfer to ‘any facility for sufficient protection’