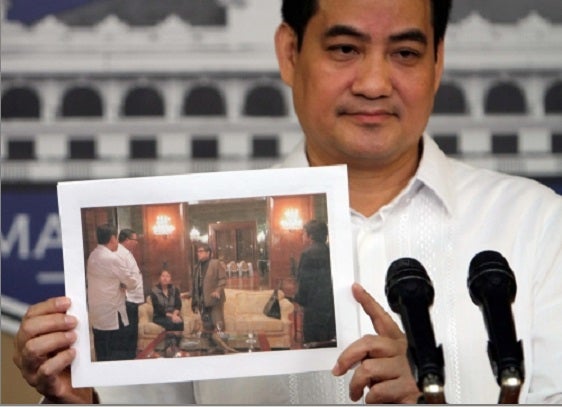 ZAMBOANGA CITY, Philippines — Janet Lim Napoles’ elder brother Ronald Lim said he was surprised at her surrender but he had heaved a sigh of relief because his sister’s life as a fugitive was over.

“We didn’t know her plans because we lost communication since she went into hiding, we just learned about it when someone called us up that she had surrendered,” Lim told the Philippine Daily Inquirer.

He said Napoles’ surrender would also do her good because she has been suffering from an illness, which he did not specify.

Lim said the surrender would also give Napoles a chance to face the allegations against her and that the family was hoping she would be given fair treatment.

“What they have been saying against her were not true,” he said.

Asked what could have prompted her sister to yield, Lim said he had suspected that his arrest by agents of the police’s Criminal Detection and Investigation Group on Sunday at the Bonifacio Global City was the main reason.

Lim was mistaken for his younger brother, Reynald.

He said Napoles’ arrest also proved that she did not flee, contrary to reports that she went on frenzy purchase of airline tickets.

“The truth is one of my nephews used her credit card to buy the tickets,” Lim said.

A whistleblower in the pork barrel scam said she was worrying about Napoles’ surrender as this could lead to something bad, especially for the witnesses.

She described the Napoles family as moneyed and influential.

“Janet Lim Napoles is a fugitive from justice and she was met by Mr. Aquino and escorted to Camp Crame, but the Sultan, Sultan Jamalul Kiram, a law abiding citizen who wished to see the President purposely to seek justice was refused audience. What kind of justice is prevailing in the country today?” Habib Hashim Mudjahab, chair of the Moro National Liberation Front’s Islamic Command Council, asked.

“We should not be surprised if Napoles’ scripted surrender results in whitewash of the evidence against administration allies implicated in the pork barrel scam,” the group said in an emailed statement.

Anakbayan said Napoles’ surrender would not deter it from continuing with its protests – similar to the one scheduled in Metro Manila today – over corruption in government.

“We will not be fooled by lies, spins and teledrama scripts,” Anakbayan said.

In Davao City, Juland Suazo, spokesperson of the environmentalist group Panalidpan-Southern Mindanao, said the surrender was an “ex-deal” between Napoles and the Aquino government.

“The surrender was an ex-deal. Napoles surrendered to Aquino then Aquino surrendered to Napoles. The ultimate objective is to dispel the public anger and to keep the pork barrel system intact,” Suazo said.

The Alliance of Concerned Teachers (ACT) said Napoles’ surrender was “expected…because Pnoy and his cohorts who cannot give up their pork barrel stand to gain more from the media blitz.”

“But then, the stink is overflowing to the rim, the recent stunt put up by the supporters of Pnoy is simply overrated,” Benjie Valbuena, ACT president, said.

“There is a perception now that this latest incident on the Napoles saga will be followed by a ‘political witch hunt,’with Napoles as the main weapon, against members of the opposition and other personalities not aligned with the interest of the Aquino administration,” Zarate said in a statement.

Zarate also said Napoles’ surrender to Aquino, himself, showed the extent of her influence in the government.

“That Janet Napoles personally “surrendered” to President Aquino, with whom she had also complained through a letter of alleged NBI harassments months ago, only confirmed the extent of her influence and wide connection, in and out of the government,” he said.

Zarate said with questions surrounding the surrender, the pork barrel scam might be whitewashed.

“More than ever, the people must be vigilant against the possible whitewashing of this multibillion-peso scandal, particularly, by sparing those individuals associated with the administration,” he said.