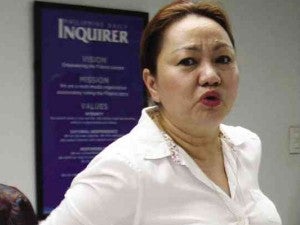 HUNT OVER After an intensive 14-day search by combined government forces and agencies and with a P10-million bounty on her head, the elusive Janet Napoles surfaces on Wednesday evening and comes face to face with President Aquino. The businesswoman from Mindanao is now in the custody of the interior department. Will she name names? EDWIN BACASMAS

“The President turned her over to the custody of Interior and Local Government Secretary Mar Roxas and Philippine National Police Director-General Alan Purisima for processing and booking,” Lacierda said.

The move pre-empted the National Bureau of Investigation Special Task Force that earlier got a hot tip on the Napoles’ whereabouts and was on its way to serve her warrant of arrest.

Napoles specifically asked through her lawyer, Lorna Kapunan, that she be brought to Camp Crame and not to the NBI.

Aquino motored to the PNP national headquarters to accept the surrender of  Napoles and turned her over to Roxas.  The President also met with Napoles’ husband, Jimmy.

But the media was barred from the meeting. Unlike criminal suspects who are immediately presented to the media, the Presidential Security Group ordered the police not to allow journalists to enter the camp.

There was no explanation why Napoles was shielded from the media.

Napoles, together with her brother Reynald Lim, went into hiding before authorities could serve the arrest warrants on them on August 15 in connection with the alleged kidnapping of the businesswoman’s aide and cousin Benhur Luy.

Luy and other former staff of Napoles blew the whistle on the conversion of P10 billion in lawmakers’ Priority Development Assistance Fund into kickbacks by Napoles and her company using dummy foundations, bogus beneficiaries and forged signatures of officials.

In a radio interview, Kapunan said her client surrendered for fear of her life.

“There are really people who want to keep her silent permanently,” Kapunan said.

“Therefore now is the right time. She said she has nothing to hide anyway,” she added.

Kapunan said she did not know where Napoles hid, adding she had no communication with her client before the fugitive businesswoman’s surrender.

The PNP spokesperson, Colonel Teodoro Sindac, said in a text message at 12 midnight that Napoles was already booked at Camp Crame. He gave no further details.

The Inquirer learned that according to Kapunan, Napoles  decided to surrender to the President before she  could be charged with plunder and other cases.

Raising the biggest bounty for a fugitive so far, Aquino earlier Wednesday announced a P10-million bounty for the arrest of Napoles.

But he said proposals to make her a state witness would be studied.

A TV news report said Kapunan had reported that her client sent surrender feelers through Manila Archbishop Luis Antonio Cardinal Tagle. However, Tagle’s spokesperson, Peachy Yamsuan,  said the charismatic church leader had not spoken with either Napoles or her lawyer.

Kapunan did not reply to text messages from the Inquirer asking for confirmation of the report.

State agents fanned out to track down Napoles and Lim, expanding the search to islands near Mindanao and Indonesia where they could have fled aboard her luxury yachts. 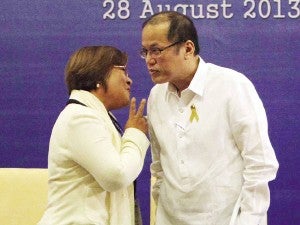 The President said that the reward for the arrest of Napoles’ brother was yet to be discussed with security officials.

Aquino warned the public against aiding Napoles and her brother. “Harboring a fugitive is a crime; obstruction of justice is a crime. If those harboring her have  good sense, they should be aware of this. And if they think we’ll stop searching for them, they’re wrong,” he said.

Public outrage, fanned by newspaper and state auditors’ reports over misuse of the fund at the disposal of lawmakers, climaxed into a mammoth rally at Rizal Park on Monday.

The President on Friday announced the abolition of the pork barrel and the replacement of this lump sum disbursements with a so-called line-item budgeting of projects for legislators. With reports from Jocelyn R. Uy and Gil C. Cabacungan