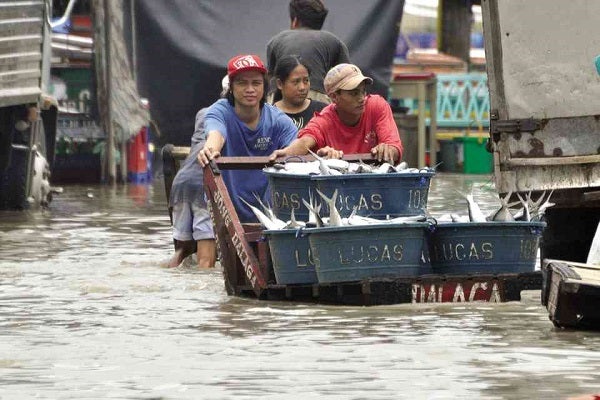 LIFE goes on for residents of Dagupan City as heavy monsoon rains enhanced by Tropical Storm “Maring” and high tide flood the area leading to the fish market. WILLIE LOMIBAO/CONTRIBUTOR

For a small but bustling coastal city crisscrossed by seven rivers and 14 creeks that all drain into the Lingayen Gulf, Dagupan experiences yearly flooding. But in the last three decades, the floods have become more intense and disruptive, with water rising in record levels and covering wider areas.

Each year, the floodwaters linger in villages longer.

As a consequence, government and business operations were disrupted, classes had to be suspended and thousands of residents had to suffer the inconvenience of wading in floodwaters.

“We are a catch basin, which means that all the water from Urdaneta City, Santa Barbara and Calasiao towns pass through our rivers [before exiting to the Lingayen Gulf],” Mayor Belen Fernandez says.

The Pantal River, which cuts through a populated area, is connected to the Sinocalan River, one of the province’s three major river systems that originate from the Cordillera mountains.

“And because our rivers and creeks are already silted, they easily overflow. They can no longer absorb the volume of water that go through them,” Fernandez says.

The rising tide in the Lingayen Gulf has aggravated the flooding problem. Add to this is ground subsidence, or the sagging of the ground level, because water drawn from its aquifers is not immediately replaced.

“So when our rivers swell and there is high tide, it’s really massive flooding. And floodwaters stay longer because of the high tide,” De Guzman says.

He says that every year, the city has always been prepared to deal with the flooding.

“We have the logistics and the capability to evacuate people, with the help of our partner agencies, such as the Philippine National Police (PNP), PNP Maritime Group, Coast Guard, Navy and Army. They are a big help in augmenting our personnel and equipment,” he says.

Fernandez says she has come up with a disaster risk reduction and management plan, which includes the clearing of creeks that began last month through a food-for-work program involving residents of flood-prone villages.

“We are going to buy a small backhoe to clear our creeks and drainage canals,” she says.

To ease the flooding problem, the city government will resume the dredging of rivers and creeks, the mayor says. “We will also build higher sea walls and dikes and raise our streets, roads and drainage systems.”

She says the city’s building code must be amended to allow for higher floor elevation of houses.

“This is for the safety of the people. They should have their floor levels raised based on the [highest recorded] flood level, maybe a meter or more than the flood level,” she says.

Families staying along rivers and creeks will have to be relocated, she says.

Lina Tan, executive director of the nonprofit Liwawa Ed Asinan Foundation, says she can only hope that the city government exercise political will to remove illegally built structures.

“We have lost our creeks and riverbanks because many structures have encroached on them,” Tan says.

In a climate change workshop Tan once attended as a presenter, the participants were asked to visualize the city after 20 years. “I told them, ‘The hardware stores in the city are gone because they are now selling diving gear and equipment. Traffic jam is also gone because everybody is now riding a boat,’” she says.

She believes in Fernandez’s sincerity to come up with a solution to the perennial flooding. “But we have to sit down, all of us stakeholders, to find a solution to this problem and implement what we will agree on, no matter who gets hurt,” Tan says.

Otherwise, she says, there will be no Dagupan they can pass on to their children. By then, she adds, the city will just be a huge “bangus” (milkfish) pond.