Gathering at Luneta a rally of several firsts
By: Leila B. Salaverria - Reporter / @LeilasINQ
Philippine Daily Inquirer / 12:36 AM August 27, 2013

It was a rally of several firsts: The first largest protest assembly since President Aquino was elected in 2010 on a platform of good governance; the first initiated and ignited through the social networks; the first without a leader and political color.

The tens of thousands of predominantly middle-class Filipinos converged on Manila’s Rizal Park on Monday without a leader but pulled together by a shared desire for the complete abolition of the pork barrel and the prosecution of the people who misused it to line their pockets.

The protesters marched across Manila and streamed into the park to stage a leaderless gathering called through Facebook and Twitter to express national rage at corruption in the government.

Ignoring a slight rain and the muddy grounds, the protesters, whose number police estimated at 85,000 to 100,000, stayed all day, hoping to drive home a common message: end graft and corruption.

Aquino tried to head off the protest on Friday by announcing the abolition of the Priority Development Assistance Fund (PDAF), a pork barrel that channels funds to congressional districts, but allocations for it would be set down in the budget starting next year.

But angered by a series of reports in the Inquirer on the alleged plundering of the PDAF by a businesswoman in connivance with legislators, the people appear to have rejected Aquino’s solution and proceeded with the march to demand the complete abolition of the pork barrel.

Start of being listened to

The protesters gathered at Luneta Park, some wearing pig masks and headgear.

Others carried banners saying “Scrap pork barrel!” or “No to pork!” 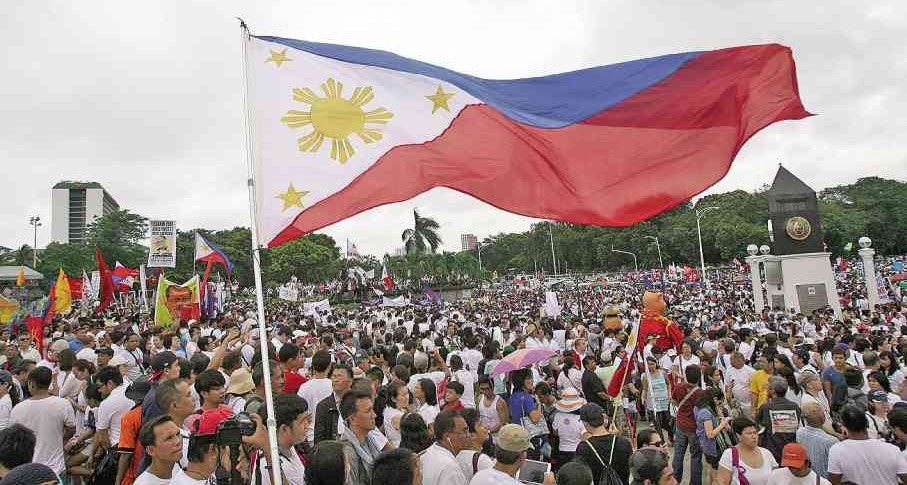 AQUINO’S BOSSES AGAINST PORK From all walks of life, Filipinos, including children, came in droves to Rizal Park in Manila to take part in the Million People March to protest the misuse of the multibillion-peso pork barrel of lawmakers and to call for the pork’s abolition. MARIANNE BERMUDEZ

“We have learned here that we all have a voice,” said Peachy Rallonza-Bretaña, one of the netizens who propagated the idea for the mass protest on Facebook and Twitter.

“If we speak up, we can be heard. It’s the start of being listened to,” Bretaña said.

She said the gathering was not leaderless, but “leader-full.”

Everybody who joined could initiate action and bring about change, she added.

After the gathering, people must sustain their anger to improve things in the government, she said.

They could educate themselves about the controversy and take further action to ensure the proper use of public funds, she said. They could write to mayors, lawmakers, even the President, to air their demands, she added.

Bretaña said the people were clearly unappeased by President Aquino’s decision to abolish the PDAF and replace it with a new system that would put it in the national budget.

“The effect of the announcement was that the people took a deeper look at what he was saying and they learned that he wasn’t actually stopping the pork,” Bretaña said.

She said the investigation of the pork barrel scam should be completed in 100 days, because people might forget the issue if the probe stretched longer than that.

At the center of that probe is businesswoman Janet Lim-Napoles, who allegedly siphoned off P10 billion in legislators’ PDAF allocations into her bank accounts through bogus nongovernment organizations (NGOs) over the last 10 years.

Five senators and 23 members of the House of Representatives have been implicated in the alleged plunder of the PDAF.

Napoles has denied any wrongdoing. But she has gone into hiding after being ordered arrested by a Makati City court for the illegal detention of the principal witness in the pork barrel scam.

A special audit by the Commission on Audit (COA) found wider corruption involving the PDAF, with billions of pesos being channeled through 82 dubious NGOs.

Ten of those NGOs had been set up by Napoles and received more than P2 billion from 2007 to 2009 alone.

Manila Archbishop Luis Antonio Cardinal Tagle, moved to tears by the pork barrel scam during a recent news conference, joined the gathering at Luneta on Monday and called on citizens to be heroes and to prove that Filipinos are honorable.

“Honorable people are those who fear God, respect life, value their fellowmen, care for the country, and respect nature,” Tagle said.

“The honorable self must prevail,” he said.

Tagle also called on the people to care for the poor as their fellowmen and to listen to the pulse of the nation. They must listen to God as well, he added.

Fr. Anton Pascual, in his homily during Mass at the park, said people must be vigilant, and that eternal vigilance was the price of democracy.

Pascual also said that if people want good government, it must start with the individual, who should shun corrupt acts as well.

The Luneta gathering failed to attract 1 million people, but Bretaña said the million mark was not the point of the event.

The point, she said, is to help people find their voices and act as one.

The Luneta protest started with a post from music executive producer Ito Rapadas, who called for a million people march because of his frustration over news that the lawmakers’ pork barrel allocations, coming from taxes paid by ordinary working citizens, were channeled into ghost projects and ended up in the pockets of greedy politicians.

Rapadas’ post was shared by friends, including musician Monet Silvestre. Bretaña saw the post and suggested that it be held at Luneta Park on Aug. 26, National Heroes’ Day.

Her idea was shared on Facebook and quickly gained online support, with people she did not know vowing to join the march and offering to help organize the protest.

Silvestre said the response of the people gave him goosebumps. It showed that Filipinos, though coming from different economic backgrounds and political and social affiliations, could unite for a common cause.

Rapadas played down the failure of the event to attract one million people.

He said he used “million” in his post because it was a good round number and an effective mental tool.

Despite the anger, the Luneta “pocket picnic” was festive and full of humor, in true Filipino fashion.

The costume of comedian Juana Change—a pig mask, a plunging red top, and a barrel around her waist—was a crowd drawer.

Also proving a big hit with the crowd was comedian Jograd de la Torre, who sang his parody song “Kawatan” about the pork barrel scandal, set to the tune of the popular hit “Price Tag.”

For the marchers, the protest was only the beginning, as talk of what should come next had begun.

A group of employees at music companies gathered at one corner of Burnham Green was overheard suggesting a boycott of taxes if the people’s demand for the abolition of the pork barrel went unheeded.

“If we just sign up for the campaign, what happens next? By April and no one involved in this mess is in jail, or the reforms we are asking for are not done, let’s just stop paying our taxes,” said musician Mike Villegas.

After the event, the park management was glad to find that the organizers kept their word and cleaned up before leaving.

Francis Martinez, head of the Parkway Clearing Group of the Metropolitan Manila Development Authority (MMDA), said only a truckload of trash was removed from the park after the protest.

“Compared to other ralliers, they were very disciplined. They even put out their own boxes for trash,” Martinez said.

There were no untoward incidents during the protest. The metropolitan police, which had put its 18,000-strong force on full alert, said the Luneta gathering was peaceful.—With reports from Erika Sauler and Jaymee T. Gamil