MANILA, Philippines—Hundreds of thousands of Filipinos gathered at Luneta Park on Monday to voice outrage at graft-tainted pork barrel fund in the largest demonstration since President Benigno Aquino was elected in 2010 on a platform to fight corruption.

Between 80,000 to 100,000, according to police estimate, turned out including professionals, students, workers, priests, nuns and even civic and showbiz personalities, in a sign of the breadth of anger over graft in the country.

Organizers said the rally drew as many as 400,000 people.

The social media-fuelled rally dubbed the “Million People March” was emulated on a smaller-scale in other cities across the country and in various cities around the world where there are concentrations of Filipinos. 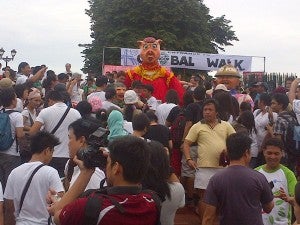 At least 180 soldiers served as backup force in Luneta and along Chino Roces Street (formerly Mendiola).

Colonel Manuel Gonzales, head of Joint Task Force National Capital Region, said soldiers were unarmed and only “have their basic equipment such as shield and baton.”

“They are not allowed to have firearms,” Gonzales said.

“We already expected that because the issue here concerns the whole Filipino people,” Garbo said in a phone interview.

But while few called for the ouster of Aquino, whose personal ratings remain high, there was widespread fury with politicians.

Retired university professor Teodoro Jurado, 80, said “We are all angry at all the stealing of the politicians. We are telling them that time is up.”

Some Manila protesters carried placards saying, “Senators, you should be ashamed of yourselves.” Others wore masks with a picture of a pig’s face, or shirts calling for the abolition of the fund.

Human rights lawyer Harry Roque complained that those who are stealing money from the people are the ones who are in Congress. “If we want citizens to follow the law, the leaders should be the ones to follow first,” he said.

“Jail them!” cried someone from the crowd.

Sister Mary John Mananzan, OSB, also called for the abolition of the “presidential pork barrel” or the President’s Social Fund.

“Fifty percent of our budget is discretionary!  What we want is a fundamental revamp of the budgetary system,” she said.

Calls for protest began circulating on Facebook and Twitter about two weeks ago after a series of exposés by the Philippine Daily Inquirer about a mammoth scam involving Congress’ Priority Development Assistance Fund (PDAF).

The PDAF is money allocated for lawmakers to be used in their pet development projects. Critics charge that they fund “pork barrel” projects which have traditionally been a source of corruption.

At the center of the controversy is businesswoman Janet Lim-Napoles, who allegedly connived with legislators to syphon off some P10 billion from the fund.

She has since gone into hiding after being charged with the illegal detention of a whistleblower.

Just before the noontime noise barrage, Peachy Bretana, one of the first to call for a “picnic protest” on National Heroes Day, thanked the participants for joining them.

“We have found our voice,” she said, addressing the crowd near the Quirino Grandstand.

A number of people gravitated towards the “command center” of the protesters where civil society personalities were allowed to give short speeches, amid the initial plan not to have any centralized program.

Middle-aged physician Paz del Rosario, one of the protesters, said she attended “to be part of a historic event.” 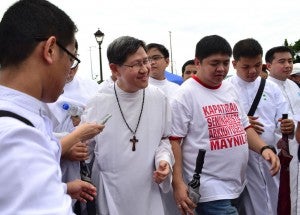 “Hopefully this will be the start of a bigger thing. All walks of life are here. This is from social media, the Internet, tweets and texts. There is no leader here,” she said.

The influential Archbishop of Manila, Luis Antonio Cardinal Tagle, called on the crowd to be “honorable” and to work together for the less fortunate.

“Let us look upon the oppressed and the poor as our true brothers. Let us listen to the heartbeat of our nation and the voice of God,” he said.

Tagle said he prayed that people would “fear God, value others, love country, take care of the environment and be honorable above all else. Systems and laws should pave the way for heroism.”

After Tagle’s short talk, the cardinal, who was driven to tears following the expose on the P10 billion pork barrel scam, led the crowd in singing the religious song “Pananagutan.”

Actress Mae Paner, more popularly known as Juana Change, who wore a pig’s snout, a wig and a barrel around her body, said she was joining millions of Filipinos who “want to abolish the pork barrel system in our country.”

Impeached Chief Justice Renato Corona, who was convicted last year by senators for failing to declare $2.4 million in bank on top of an allegedly commingled amount worth P80.7 million, joined the crowd but left after being heckled by some protesters.

Several civil society groups and peoples organizations set up discussion areas near Roxas Boulevard while others showed off their protest paraphernalia. Several groups of musicians also performed in various parts of the park.

Public school teachers, who are members of the Teachers’ Dignity Coalition, printed their own rally t-shirts with the slogan “Scrap the Pork, Jail the Crooks, Fund our Schools.” They carried posters with the slogan, “Teachers, honest taxpayers.”

“By marching in the streets, we could leave a legacy for our students and our own children, that they will grow up in a country free of corruption and thievery and would make them proud as Filipino people,” TDC chairperson Benjo Basas said. 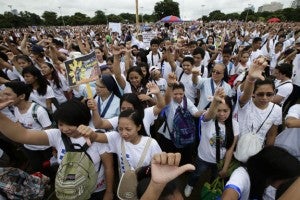 Tens of thousands of protesters flash thumbs down signs during the rally. AP

Officials’ misuse of funds has been long embedded and practically accepted in the Philippine political system.

Aquino had previously expanded the PDAF under his 2014 budget so that each senator will receive P200 million while each member of the House of Representatives gets P70 million for their “pork barrel.”

But in the face of growing anger last week, Aquino announced that he was suspending the releases of money and vowed to reform the system.

At a speech marking National Heroes’ Day, Aquino said the government would catch those who stole state funds.

“We will do everything in our power to find those who conspired to take advantage of the PDAF’s good intentions, and to hold them accountable,” he said.

But protesters were skeptical.

“Do it first and don’t be all talk,” Mena Betocabe, a teacher for 35 years, said.  “We are here to join the protest. As a teacher, it is my right to take part in this activity because I am also paying my taxes.” 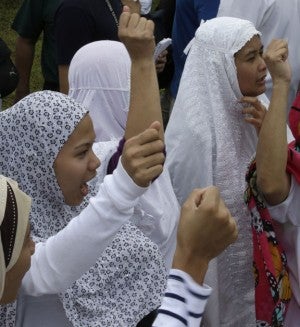 Filipino Muslims shout slogans as they join a rally at Rizal Park. AP

Rudolfo de Jesus, 47, a vendor from Silang, Cavite, said that he was also doubtful about Aquino’s statement.

“If pork barrel will be removed completely then that’s good, but if he would leave some intact then that would not be right. Everyone should be equal,” de Jesus said in Filipino.

“For me, PDAF should really be abolished, so that the money will really [benefit] the poor,” he added.

Meanwhile, Ryan Oriondo, 37, president of the Nasugbu Bike Club and a businessman, said he believes in Aquino’s pronouncement to abolish the PDAF.

“I just believe him. I hope it really will be abolished,” he said. “I hope they come up with a better way [to use the funds] for our country.”

The misuse of the pork barrel appears to have continued under the watch of Aquino, with huge amounts being funneled into bogus non-government organizations.

Between 2010 and 2012, some P500 million of the PDAF went to fake nongovernment organizations, documents obtained by the Inquirer show. With Dona Z. Pazzibugan and Gil Cabacungan Philippine Daily Inquirer; Agence France-Presse, Associated Press 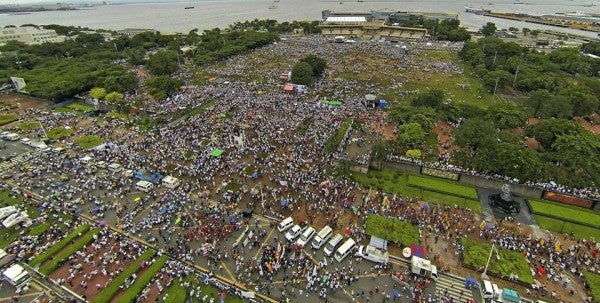 Read Next
4 towns hit by ‘Labuyo’ still in the dark
EDITORS' PICK
Acer Philippines welcomes you to its first flagship store
Pope Francis to miss events due to new flare up of leg pain—Vatican
PNP’s Covid-19 cases jump to 9,809; 52 new infections logged
New Year, New Rediscoveries
Is your company a growth champion? Stand up and be recognized!
More than 150 National Guard in Washington for Biden inauguration test positive for coronavirus
MOST READ
AFP to apologize to UP alum falsely included in list of NPA members — Lorenzana
Former US envoy to PH Sung Kim appointed to State Department
Ellen DeGeneres, too, is baffled by viral Filipino soda ad
Tennis: Alex Eala claims first pro title
Don't miss out on the latest news and information.