4 towns hit by ‘Labuyo’ still in the dark 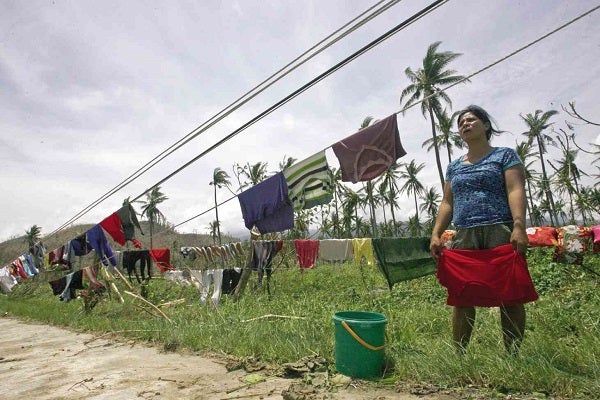 CABANATUAN CITY— About 9,000 power consumers in three towns in Aurora province and a town in Isabela province are still without electricity since Typhoon “Labuyo” brought destruction to northeastern Luzon on Aug. 12.

But an official of the cooperative servicing these areas said power could be restored as soon as other cooperatives in Central Luzon were pitching in to hasten the repair of transmission lines in the two provinces.

“Fifty-eight linemen from the electric co-ops in Central Luzon are helping our men to rehabilitate the affected electric posts and lines. Their assistance will certainly make the rehabilitation work faster,” Noel Vidad, general manager of the Aurora Electric Cooperative, said in a report from the Philippine Information Agency.

He said 324 electric posts were toppled by Labuyo’s strong wind in the towns of Casiguran, Dinalungan and Dilasag in Aurora province, and in Dinapigue town in Isabela province. He put the losses suffered by the cooperative at P9.6 million.

Reynaldo Villanueva, president of the Central Luzon Electric Cooperatives Association (Cleca), said the linemen were made available by the management of 11 cooperatives in the region as a “demonstration of the unity [of the association] and to demonstrate our concern for the welfare of the electric consumers of the affected areas.”

“The expenses of the linemen for food and other provisions will be shouldered by their respective cooperatives while working there,” he said.

Villanueva, who is also the board president of the Nueva Ecija Electric Cooperative II Area 1 and Area 2, said the Cleca members provided boom trucks to assist the linemen in the repair that would take about two weeks.

Three cooperatives from Nueva Ecija, four from Pampanga, two from Tarlac and one each from Zambales and Bataan have joined the task of repairing the power system in Aurora and Isabela. Anselmo Roque, Inquirer Central Luzon