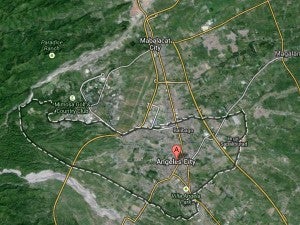 ANGELES CITY, Philippines – “Yes!” was the resounding reply of those in a crowd of more than 1,000 people when Pampanga Auxiliary Bishop Pablo Virgilio David asked them if they thought that those involved in the pork barrel scam, lawmakers included, were thieves.

Before David asked this, he first shared the views of a female pickpocket who wondered why she was languishing in jail for stealing to feed her kids and those who looted the people’s money were free.

“Aren’t they thieves too?” she asked.

“We have to call a spade a spade,” David told mass-goers who came to the Holy Rosary Parish in solidarity with the Million People’s March in Rizal Park also on Monday.

The real issue, according to the bishop, was the politics of patronage that the priority development assistance fund bred. He openly wondered at the “deafening silence” of senators and congressmen about calls for a probe on the misuse of PDAF by their colleagues.

“Malaki ang kanilang pananagutan sa Diyos at bayan (They have a lot to answer for to God and the nation),” the bishop said toward the end of his homily, urging Catholics to do their part by being responsible citizens.