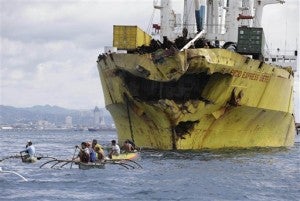 Volunteers search near the bow-damaged cargo ship Sulpicio Express Siete Saturday Aug. 17, 2013, a day after it collided with a passenger ferry off the waters of Talisay city, Cebu province in central Philippines. AP/Bullit Marquez

CEBU CITY, Philippines—Authorities began Friday a formal inquiry into a collision between a ferry and a cargo ship off Cebu which killed at least 80 people and left 40 missing, as they considered calling off the search for survivors.

Navy boats and helicopters continued to scour the waters for those still missing from the MV St. Thomas Aquinas ferry, which sank quickly after the collision on August 16.

The captains of both vessels involved were summoned by coastguard and maritime authorities to shed light on the disaster, said Commodore Gilbert Rueras, an official of the inquiry board.

“We have a clearer picture of what happened,” Rueras told reporters without providing any more details.

Local media reported that during the inquiry both captains said they were in the correct sea lane and had tried to reach each other by radio but failed to make contact.

A total of 750 passengers and crew of the 870 on board the ferry were rescued. Many of those still missing are suspected to have become trapped inside the sunken wreck.

Authorities are discussing a proposal to wind up the search for survivors by Saturday and focus on retrieving the dead, said provincial civil defense chief Neil Sanchez.

“We’re still hopeful (of finding survivors) but the reality is chances are really very slim,” he said.

Divers who have been pulling out corpses from the sunken ferry this last week Friday spotted more bodies in the vessel but were unable to bring them up, said Sanchez.

“There are areas where they see bodies floating. Some are tangled in ropes and tarpaulins. But they need to clear the area of debris first because it is a safety hazard,” he said.

The cargo vessel, Sulpicio Express 7, was damaged but did not sink.

Meanwhile Sanchez said technical divers hired by the ferry operator have plugged a hole in the sunken ship that had been leaking bunker fuel, polluting nearby mangroves, fishing grounds and beach resorts.

Ferries are one of the main forms of transport across the archipelago of more than 7,100 islands, particularly for the millions who cannot afford to fly.

But sea accidents are common in the Philippines, with poor safety standards and lax enforcement typically to blame.