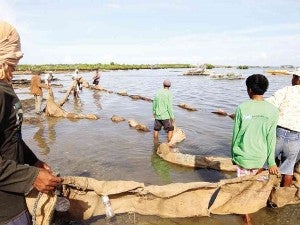 CORDOVA, Cebu—Cebuanos are racing against time to stop the spread of an oil slick that endangers marine life in a coastal municipality on Mactan Island where the livelihood of 5,000 fishermen is on the line.

Local officials have been appealing for saw dust, coconut husks, feathers, hair, stockings and used clothing that can be used for makeshift oil spill booms to stop the spread of oil from a sunken passenger vessel that went down after being rammed by a cargo ship on Aug. 16.

These materials were identified by the Department of Environment and Natural Resources (DENR) as environment-friendly oil absorbent.

A six-wheel truck delivered saw dust from furniture companies from Mactan Export Zone to Cordova town, which was worst hit by the oil slick.

The inmates at Cebu Provincial Detention and Rehabilitation Center (CPDRC) volunteered to have haircuts on Thursday so they could donate their hair to Cordova town.

According to CPDRC consultant Marco Toral, five sacks of hair were collected after 1,650 inmates volunteered to have haircuts.

ABS-CBN Cebu has set up a drop-off point for the indigenous materials at Fuente Osmeña Circle, which will be picked up by trucks from Cordova.

The oil collected will be given to cement plants in Naga City and San Fernando town in southern Cebu and  will be used to run their machines.

9 p.m. on Aug. 16 while entering the Mactan Channel off Lawis Ledge, Talisay City, just 3.2 kilometers from the port.

The Thomas Aquinas sank a few minutes after it was rammed. As of Thursday, 75 bodies have been retrieved while 46 remained missing. More than 500 passengers were rescued.

But oil started to leak from the sunken ship, which was loaded with 20 tons of diesel oil and 120 tons of bunker oil.

Cebu Gov. Hilario Davide III has declared a state of calamity in the entire province after the oil slick reached 12 of 13 villages in Cordova town and portions of Talisay and Lapu-Lapu cities.

A DENR assessment report showed that 328 hectares of mangroves contracted by nine peoples’ organizations in Cordova town and one in Lapu-Lapu City were destroyed.

The report said  these mangrove plantations were established from 2009 to 2012 through the integrated coastal resource management project.

Most mangroves were less than a meter tall and had died due to lack of or the absence of carbon dioxide required during photosynthesis and too much heat generated by the oil slick. Hydrocarbons in crude or lube oil emit or discharge heat.

Three villages in Lapu-Lapu— Calawisan, Babag, and Suba-basbas—were also affected as well as some beach resorts in the city, which Mactan Island is famous for.

Guests were advised to stay out of the water while resorts used old towels and bed sheets in collecting oil before this reached the shore.

Because of the oil slick, the livelihood of 5,000 fishermen in Cordova was put on the line.

Fisherman Roger Sumagang said he stopped fishing since Aug. 17, a day after the sinking of the Thomas Aquinas because oil covered the catch he had when he tried to fish.

Consumers also refused to buy any sea product—shellfish and fish—after learning that these were caught in the area, he added.

On regular days, Sumagang said a fisherman could earn a minimum of P200 a day. If they were lucky, he added they could get as much as P1,000 a day.

Sumagang, head of Nagkahiusang Mananagat sa Bangbang (Namasba), said even their fish pen was hit by the oil slick and killed most of the fish that were due for harvest next month.

Namasba has 69 members with more than 100 dependents.

Rodrigo Agasita, Namasba liaison officer, raised fears that with their main source of livelihood gone, they might not be able to feed their children who have to go to school.

Sumagang said they received each an initial kilo of rice on Tuesday but it was barely enough to feed a family with six children.

Cordova Mayor Adelino Sitoy told the affected fishermen that they would continue to receive food assistance from the municipality.

Andres Bojos, Bureau of Fisheries and Aquatic Resources (BFAR) director in Central Visayas, said his office had set aside P1.4 million in livelihood assistance for the affected fishermen in Cordova.

He said the livelihood programs would include mangrove potting and planting. The regional BFAR would also provide fuel to fishermen so they could fish in areas not affected by the oil slick.

At least 120 households are seen to benefit from the initial BFAR livelihood assistance.

In the meantime, a massive cleanup drive was launched by local government units, military, police, Philippine Coast Guard (PCG) and concerned citizens to remove the oil slick from Mactan waters.

Two London-based oil spill experts from the International Tanker Owners Pollution Federation (ITOPF) arrived on Aug. 19 in Cordova to assess the extent of the oil spill and discuss with the PCG  measures to stop its spread.

They were Dr. Michael O’Brien, an expert in environmental impact analysis, resource valuation and damage assessment, and Nicky Cariglia, an expert in tropical coastal management.

A team of Japanese salvage experts, also arranged by the firm 2GO, which owns the Thomas Aquinas, arrived on Aug. 20. The Japanese salvage team includes technical divers and an expert in salvaging oil from sunken vessels.