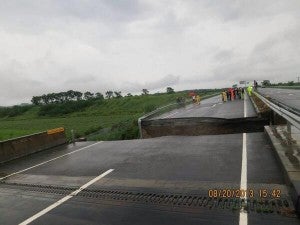 CITY OF SAN FERNANDO, Pampanga – A Bailey bridge is expected to allow light vehicles to pass  through the Porac section of the 94-kilometer Subic-Clark-Tarlac Expressway in the next few days and remove the hassles of going around alternate routes to get to Subic or to Clark, an official of the Bases Conversion and Development Authority  said on Friday.

Arnel Casanavo, president and chief executive officer of the BCDA, said he began talks with Public Works Secretary Rogelio Singson to explore the idea of putting a portable, pre-fabricated bridge over the damaged approach to the Pasig-Portero Bridge of the SCTEX in Porac, Pampanga. These are like Lego bricks put together by bolts.

“DPWH Secretary Singson and I had discussed the matter and the BCDA and DPWH engineers are working on it already,” Casanova said in a statement.

He described the bridge as “structurally safe” and had “withstood the strong lahar currents.”

Casanova said the repair works, which would begin when the weather improves, would “proceed smoothly and quickly, and that temporary rerouting of vehicles will be done systematically.”

“Getting SCTEX back to 100 percent is a top priority for the BCDA,” he said.

The SCTEX from Clark South going to Porac remains closed but the Clark-Tarlac section is open to all vehicles.

Motorists from Manila or Tarlac going to Subic/Tipo, are advised to exit at the Clark South Interchange then take the Clark Friendship-Manibaug Road going to Porac Interchange (to enter SCTEX).

Meanwhile, motorists from Subic/Tipo going to Tarlac or Manila may exit at Porac Interchange then take the Manibaug-Friendship Road going to Clark South Interchange (to enter SCTEX).