18 major roads in Luzon damaged in wake of storm 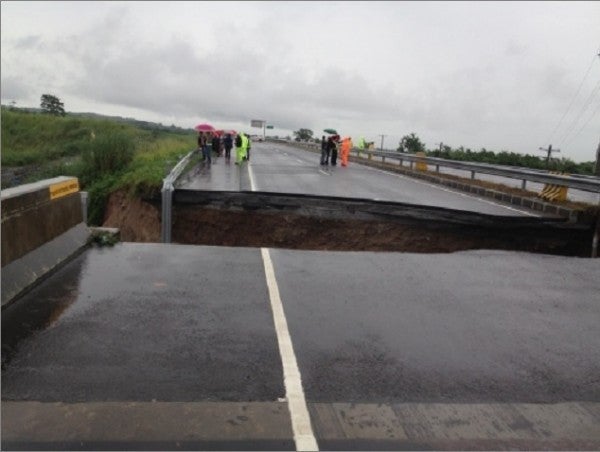 Rains remobilize volcanic sediments from Mt. Pinatubo’s 1991 eruptions, destroying the embankment of the Pasig-Potrero Bridge of the Subic-Clark-Tarlac Expressway, cutting through the approach on both lanes, isolating motorists to Subic and Clark. PHOTO BY PAMPANGA BOARD MEMBER MIKE TAPANG

MANILA, Philippines—At least 18 major roads in four Luzon regions that were damaged by floods triggered by torrential rains are still closed to traffic, according to the Department of Public Works and Highways.

In an advisory Thursday, the DPWH Public Information Division said the agency’s field personnel in the Cordillera Administrative Region, Ilocos Region, Central Luzon and Southern Tagalog were “clearing the affected roads of storm debris and other road obstructions.”

The same teams have “installed the needed traffic signs to pre-warn motorists in these areas,” said Elizabeth Pilorin, chief of the DPWH-PID.

The damaged thoroughfares include the following:

* Luna-Bagar road and the San Fernando-Bagulin road, both in La Union;

* San Carlos-Calasiao road and the Malcup road, both in Pangasinan;

According to Pilorin, “the roads in the CAR were also closed due to recurring landslides while those in Bulacan and Bataan remained impassable due to flood waters.”

DPWH field personnel in the four regions are “facilitating the emergency reopening of these storm-damaged roads and bridges,” she assured.