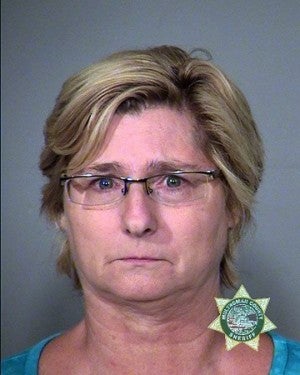 Irina Walker is shown in this booking photo provided by the Multnomah County, Ore., Sheriff on Friday, Aug. 16, 2013. Two years ago, Irina Walker hobnobbed with European royalty in Bucharest to celebrate the 90th birthday of her own regal father, former Romanian King Michael I. On Friday, she and her husband John Wesley Walker, a former Oregon sheriff’s deputy, appeared in court to face charges they ran a cockfighting business on their ranch in Eastern Oregon. AP Photo/Multnomah County Sheriff

PORTLAND, Oregon — Investigators say a Romanian princess sold food and alcohol during cockfighting derbies that she and her husband are accused of running at their Oregon ranch.

In an application for a search warrant unsealed this week, investigators say two informants secretly recorded the cockfights for a year.

Authorities say the videos show Irina Walker, daughter of the last king of Romania, selling alcohol and food to spectators.

Walker and her husband, former deputy sheriff John Walker, have pleaded not guilty to charges of running an illegal gambling operation and conspiring to violate the Animal Welfare Act.

Authorities say roosters are often given drugs to improve their performance.