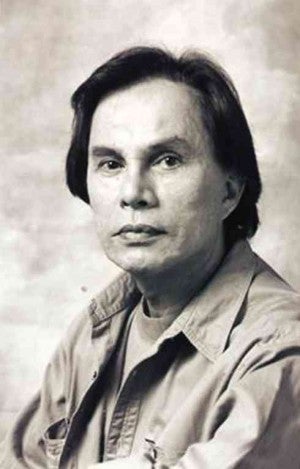 In 1963, Upsilon Sigma Phi fraternity member Eric de Guia— also known as independent filmmaker Kidlat Tahimik—needed to complete the requirements in 11 subjects to graduate from the University of the Philippines.

His friend and fraternity brother, Benjamin “Behn” Cervantes, who himself had five “INCs” (campus code for “incomplete”), suggested: Why not join forces so they could all meet their academic requirements?

In 14 days, the trio of Cervantes, De Guia and another schoolmate Lino Brocka raced against time and helped each other out, working feverishly from a house on UP campus.

“Behn said, let’s do it together, let’s get to the finish line together. And so Lino would type, Behn would go to the library and I was in charge of going to Little Quiapo for our food. There was no delivery (service) back then,” said De Guia, one of the speakers who recalled fond memories of Cervantes at the Church of the Risen Lord in UP.

Cervantes, an Upsilonian and UP alumnus acclaimed for his work in film, theater and political activism, passed away Thursday last week at the age of 74. His fraternity held necrological rites to bid him farewell Monday night.

De Guia recalled what he considered a defining moment in his friendship with Cervantes, during their “race” to graduate in 1963, when he was working on his last term paper and was nearly at his wits’ end.

He had only a few hours left before the board of regents finalizes the list of graduates that fateful Saturday in 1963. “I was panicking and typing. My paper was going around in circles. Then Behn screamed at me: ‘Your paper has become all sound and fury! Just simplify it and condense it.’”

This calmed him down and enabled him to focus, until he was able to submit the paper—which De Guia’s professor later noted for being “concise and to the point.”

“Behn, thanks for your insight that day … And for the screaming,” De Guia said to his friend.

Another Upsilonian, Jaime Dasca Doble, said he started out as Cervantes’ production assistant when he joined UP Repertory in 2008.

“I used to make him coffee. As a mentor, he always had an eye for young bright minds,” said Doble, who is now studying to be a priest.

According to him, Cervantes believed that UP was a laboratory for its students and that, naturally, roles in productions should go to students. Doble always addressed him as “senior brod” in deference to Cervantes who joined the fraternity in 1958.

“I came here to say good bye to Behn, a dear friend. We cannot pull you back now. Good bye, but in our hearts, you will never die,” he said.