MANILA, Philippines  — Flooding caused by some of the Philippines’ heaviest rains that submerged more than half the capital began receding Tuesday even as authorities evacuated thousands of residents along Manila’s overflowing rivers and braced for more chaos in outlying provinces. 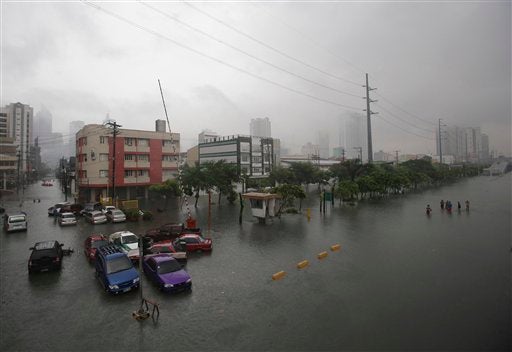 Vehicles are parked along a flooded area at the financial district of Makati, on Tuesday, Aug. 20, 2013. AP

At least eight people have died, including four who drowned north of Manila. The dead included a 5-year-old boy whose house was hit by a concrete wall that collapsed, and a 3-year-old boy who fell into a swollen river in Mariveles town in Bataan province. Four people are missing.

Throughout the sprawling, low-lying capital region of 12 million people, offices, banks and schools were closed and most roads were impassable. People stumbled through waist- or neck-deep waters, holding on to ropes strung from flooded houses.

More than 200 evacuation centers were opened in Manila and surrounding provinces, filled with tens of thousands of people, Social Welfare Secretary Corazon Soliman said. Overall, more than 600,000 people have been affected by the floods. 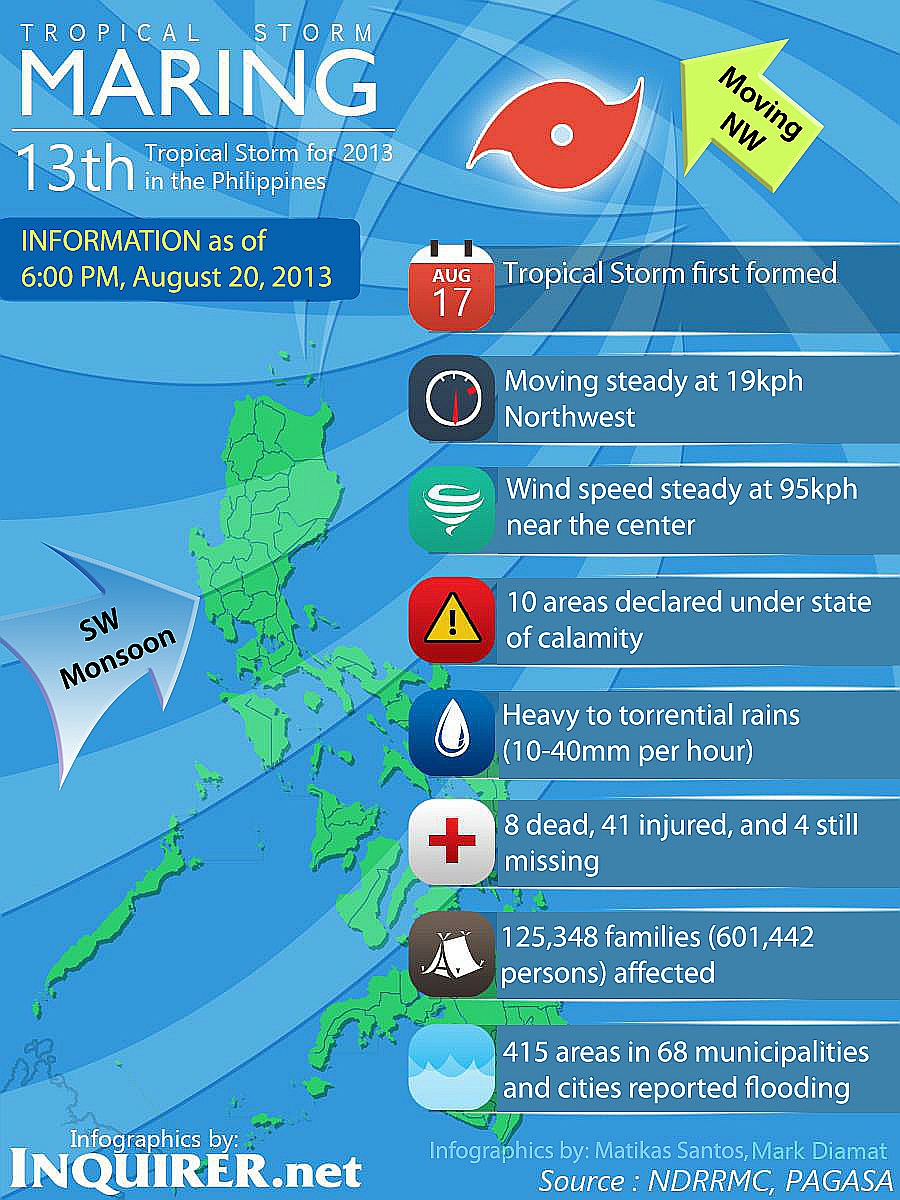 “I had to wade through waist-deep flood. I just need to go to the house of my boss … to get some money, then go home,” said Esteban Gabin, a 45-year-old driver, who was plotting the best route to check on his family in Pampanga province, northwest of Manila. “But I may have to swim to reach my home because we live near the Pampanga River, and the flood there could reach up to neck deep.”

The flooding that covered half of the city receded to 20 percent, concentrated on Marikina and Parañaque cities, said Eduardo del Rosario, head of the national disaster council.

In Marikina, where the river breached its banks, authorities started evacuating some 12,000 people to schools and gymnasiums that were turned into emergency shelters.

As the weather gradually improved in Manila, the concern shifted to provinces outside the capital that were expected to be drenched as the monsoon travels north.

In Pampanga’s rice-producing town of Minalin, more than 200 villagers fled after water from a swollen river spilled over a dike and began flooding communities amid pounding rains. Villagers scrambled to lay sandbags on the dike and in front of their houses, said Office of Civil Defense officer Nigel Lontoc.

“The villagers are afraid that the dike may collapse any time,” Lontoc said by phone.

About 200 members of the Aeta tribe living near the foot of Mount Pinatubo left their homes for fear of being swept away by a raging river near Botolan township in Zambales province, said Elsa Novo, a leader of an Aeta federation in the province. She said other family members stayed behind to watch their property.

Evacuations were also underway around the La Mesa dam, north of Manila, which began overflowing because of excess water. The waters from the dam flow into the Tullahan River, which passes through some of the densely populated areas of the capital.

The flooding followed two nights of heavy monsoon rains, enhanced by Tropical Storm Trami. The storm hovered over the North Philippine Sea and drenched the main northern island of Luzon with up to 30 millimeters (just over an inch) of rain per hour. It was forecast to move away from the Philippines toward Taiwan on Wednesday.

In many coastal towns along swollen Lake Laguna, near Manila, and in food-growing riverside provinces, residents were trapped on rooftops, waded through the streets or drifted on makeshift rafts. Many chose to stay close to their homes for fear they would be looted if they left.

Flooding has become more frequent in Manila because of deforestation of mountains, clogged waterways and canals where large squatter communities live, and poor urban planning.

According to an assessment from the Department of Science and Technology, rainfall reached 600 mm (23 ½ inches) in and around Manila Bay on Sunday alone — more than a month’s worth of rain in a day. That’s compared to the disastrous 2009 Typhoon Ketsana, the strongest cyclone to hit Manila in modern history with 455 mm of rain in 24 hours.

Many domestic and international flights at Ninoy Aquino International Airport were cancelled. Key roads leading to the airport were flooded and passengers and crew were inevitably delayed.

The Philippine archipelago is among the most battered by rainstorms in the world. About 20 tropical cyclones hit the country.

Pateros placed under state of calamity