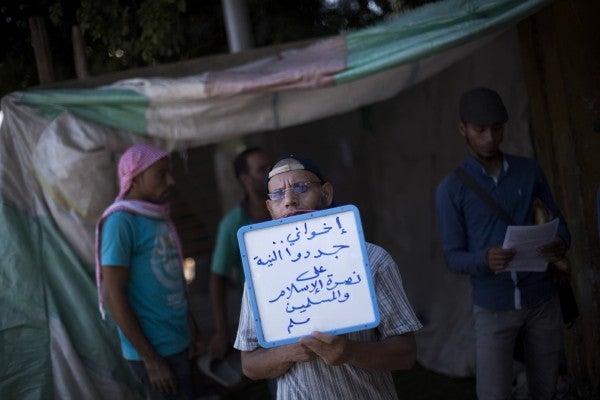 A supporter of Egypt’s ousted President Mohammed Morsi holds a sign that reads, “Brotherhood, renew you intent to support Islam and Muslims,” during a protest near Cairo University, in Giza, Egypt, on July 26, 2013. Thirty-six were reportedly killed when Muslim Brotherhood detainees tried to escape from a prison truck convoy. AP PHOTO/MANU BRABO

CAIRO – Thirty-six Islamist prisoners were killed Sunday during an attempted jailbreak, bringing to almost 800 the toll in five days of violence since Egypt moved to crush supporters of ousted president Mohamed Morsi.

The violence comes amid a relentless security crackdown on Morsi’s Muslim Brotherhood movement that includes the arrest of top Islamist leaders.

It has drawn widespread international condemnation, with senior European Union diplomats set to hold emergency talks on Monday to discuss the situation and future EU action.

The Egyptian interior ministry said the prisoners had taken an officer hostage and died after suffocating on tear gas.

“Thirty-six of the prisoners died of suffocation and crowding after tear gas was used to stop their escape,” the ministry said.

The killings were the latest in five days of bloodshed sparked by a bloody police and military operation to clear Islamists from protest camps in Cairo.

In his first remarks since the campaign was launched, military chief Abdel Fattah al-Sisi, who overthrew Morsi on July 3, warned security forces would confront any further violence from protesters.

“We will never be silent in the face of the destruction of the country,” Sisi told top military and police commanders.

“We are very prepared for this,” he said, pledging a “forceful” response to further attacks on police stations and government buildings.

The army and police have sent reinforcements to the Abu Zaabal prison, the scene of Sunday’s deadly jailbreak attempt, the official MENA news agency reported.

The pro-Morsi Anti-Coup Alliance, which has been pressing for the Islamist leader’s reinstatement since the army toppled him in a popularly backed coup, accused police of killing 52 prisoners.

“The killing of 52 of anti-coup detainees emphasises the systematic violence practised against opponents of the coup, and emphasises the killing operations in cold blood they face,” the group said in a statement in English.

“They were reportedly assassinated in their truck with live ammunition and tear gas fired from windows,” said the Brotherhood-led group.

The Islamists said they cancelled “several marches” on Sunday, citing fears of vigilantes and snipers, but that others would go ahead.

At a mosque in the Dokki neighbourhood of Cairo, where one march was scheduled to begin, residents stood guard.

“We are waiting for them. I swear we will kill them if they approach the mosque,” one said.

In the evening, the interior ministry announced a ban on vigilantes who have formed self-styled “popular committees” and urged citizens to respect a nightly curfew.

The announcement came as hundreds of protesters briefly marched in the Suez canal city of Ismailiya, an AFP correspondent said.

Two policemen were later killed in a shooting attack near the city, the interior ministry said.

The rallies had been expected to be a test of the strength of Morsi’s loyalists in the wake of the crackdown.

On Saturday, police stormed a Cairo mosque where Islamists were holed up, after trading fire with gunmen inside its minaret.

On Sunday morning, the capital showed signs of returning to normal, with traffic beginning to flow again and banks and shops reopening for the first time since Wednesday.

Security forces on Wednesday stormed two camps of Morsi supporters, sparking clashes that killed at least 578 people across the country.

In the 24 hours after that, another 173 people were killed, according to the government, putting the four-day toll at 751.

The violence has shocked the international community, but Egypt’s army-installed government has fiercely defended its actions while dismissing reports it plans to ban the Brotherhood.

The unrest has left Egypt divided as never before.

Vigilantes have pulled bearded men out of cars, and a mob chanted “terrorists” as Morsi supporters were dragged from Cairo’s Al-Fath mosque on Saturday.

According to an AFP tally, more than 1,000 people have been killed since mass demonstrations against Morsi at the end of June, among them a son of the Brotherhood’s supreme guide who died on Friday.

Violence has also continued to plague the Sinai Peninsula, where a civilian, two soldiers and a policeman were killed overnight Saturday, security sources said.

The European Union said Sunday it would review ties with Egypt’s army and government unless the bloodshed ends.

“The EU will urgently review in the coming days its relations with Egypt,” EU leaders Herman Van Rompuy and Jose Manuel Barroso said.

British Foreign Secretary William Hague called his Egyptian counterpart to condemn violence by both sides, and described as “unacceptable” attacks against churches.

The United States has announced the cancellation of its biannual military exercise with Egypt, and its embassy in Cairo was closed Sunday for security reasons.

The White House has stopped short of suspending $1.3 billion in annual aid, although some US lawmakers called Sunday for the funds to be cut.

But the international response has not been uniformly critical. Both Saudi Arabia and Jordan have said they back Egypt in its fight against “terrorism”.